Olympic National Park’s nonnative mountain goats are being rounded up and shipped to the Cascade Mountains.

There is a popular hiking trail in the Cascade Mountains right off the busy I-90 highway, an hour outside of Seattle. At the top of the trail, on Rattlesnake Ridge, hikers are rewarded with dazzling views of the mountains across the valley and the lake down below. One day recently, a new visitor was taking in the scene: a mountain goat. Just weeks earlier, she had been grazing the alpine meadows of Olympic National Park, but wildlife officials there decided she had overstayed her welcome.

Mountain goats are not native to the park, so this one and dozens of others have been taken out of Olympic and relocated to various sites in the Cascades, which are part of their historical range. “Mountain goats belong in the Cascade Mountains, plain and simple,” said Rachel Blomker, a spokeswoman for the Washington Department of Fish and Wildlife.

Goats were introduced to the Olympics nearly a century ago and have been causing problems there ever since. Their numbers have grown exponentially, they’ve damaged habitat and, in some cases, they have become a danger to humans. And so in September, after more than four years of planning, the National Park Service, the Washington Department of Fish and Wildlife, and the U.S. Forest Service teamed up to capture about 100 of Olympic’s 700 or so mountain goats and transport them to the Cascades. “It’s really two restoration projects in one — restoring both the Olympics and the Cascades and providing the goats with a better long-term home,” said Rob Smith, NPCA’s regional director for the Northwest.

Olympic is a rugged place, so officials hired a helicopter with a crew of three for the operation. From a height of about 25 feet, they used net guns and tranquilizer darts to immobilize one or more animals as a cluster scattered. Then, as the helicopter hovered, a crew member jumped out, strapped the bewildered goats’ legs, padded their horns and covered their eyes with masks. Once the goats were secured in slings, the helicopter took off — with the goats dangling in the air — and flew to a staging area where the animals were examined by veterinarians and prepared for truck trips to release locations. 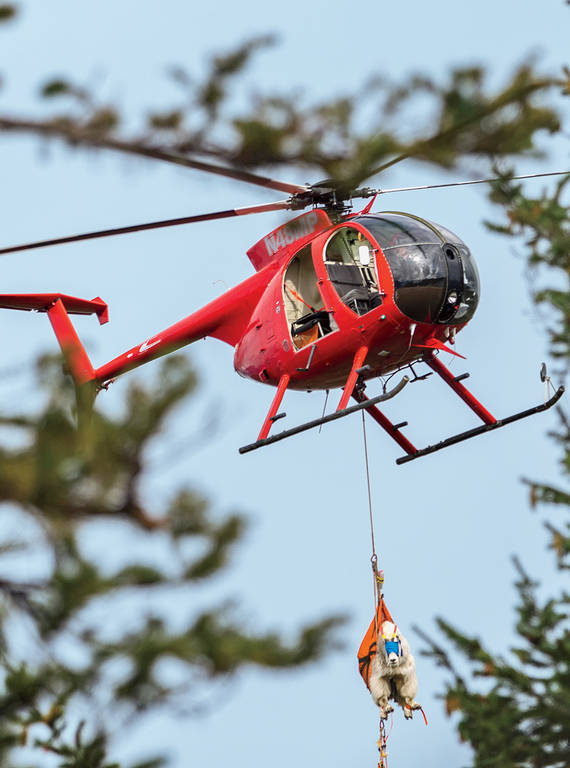 In September, wildlife officials removed 115 mountain goats from Olympic National Park in Washington. The animals are not native to the park and are being relocated to the Cascades, which is part of their historical range.

Relocation is risky business for the goats. Of the 115 goats captured in September, six died during capture, three were euthanized because they were unfit for relocation and two succumbed on their way to the Cascades. Five have died after their release, including two within the first week.

Wildlife officials expect to capture about 50 percent of the population by 2020, and skilled volunteers and park staff will shoot the stragglers. Officials hope the park will be goat-free within five years.

Though the Olympic Mountains are only 70 miles west of the Cascades, the ecosystem there is quite different. The isolated range is home to rare plants that have suffered since the arrival of the goats, which have feasted on triangular-lobed moonwort, cut-leaf synthyris, tall bugbane and Cotton’s milkvetch among others. Because the goats eat many of the plants favored by Olympic marmots, wildlife officials worry the small population of the endemic rodents could suffer. The goats’ wallowing and trampling further degrades the meadows’ delicate cover, said Penny Wagner, a park spokeswoman. “Alpine and subalpine soils in the Olympic Mountains are young and poorly developed, making them sensitive to disturbance,” she said.

The goats aren’t threatening just the plant life; they’re threatening visitors, too. Goats are attracted to salt, but few natural salt licks exist in the park. There are, however, plenty of humans, whose salt-rich urine, food, sweat and camp wastewater attract goats, putting animals and people at risk. In 2010, a 63-year-old park visitor tried to shoo away a goat that was following him. The goat gored him in the leg, and he bled to death. Park staff found the goat later that day and killed it.

In the 1920s, sport hunters released a dozen goats from British Columbia and Alaska in the area that would become Olympic National Park in 1938. Over time, the goat population increased, and so did the calls for their removal. Between 1981 and 1989, over 400 goats were captured at Olympic and released in several Western states. “The mountain goat — poor bastard — his days are numbered,” wrote Timothy Egan in his book “The Good Rain,” published in 1990. “They tear up the fragile meadows, defoliate the shrubs, and drop large turds in the trickling fresh water of the alpine zone.” The operation stopped for several reasons, including public opposition to killing goats that weren’t relocated. Park officials also rejected a sterilization campaign after determining that it would not be effective, and the goat population continued to rebound.

This time, park staff and their partners are determined to follow through, and they are hopeful about the benefit not only to Olympic but also to the Cascades. Salt licks are more abundant there than in the Olympics, and the goats can eat the local flora to their heart’s content. “The ecosystem is primed for it,” said Rich Harris, a wildlife manager at the Washington Department of Fish and Wildlife who specializes in mountain goats.

The Cascade Range can easily accommodate three times as many goats as its current population, Harris said, and he expects the new arrivals will eventually flourish in their ancestral land. Right now, they’re reacquainting themselves and taking their first tentative steps. “There’s been a lot of exploring,” he said. “They’re all trying to get a sense of where they are.”