The largest wave ever recorded crashed down in 1958 on the coast of what is now a national park. The wave, a tsunami triggered by a powerful earthquake, killed two people and caused tremendous damage. Do you know where this massive natural disaster occurred?

Lituya Bay, site of the largest wave ever recorded.

Waves generally form when winds create friction on the surface of an ocean or large lake, transferring energy from the air to the water. As these currents approach the coast, where the seafloor is nearer to the surface, the water is forced upward, where it crests and breaks.

Some of the most powerful and destructive waves, however, are created with energy not from the air but from the earth. Sixty years ago, one such event wreaked havoc on a remote Alaskan bay that, due to its geography, is unusually prone to weathering extreme waves. 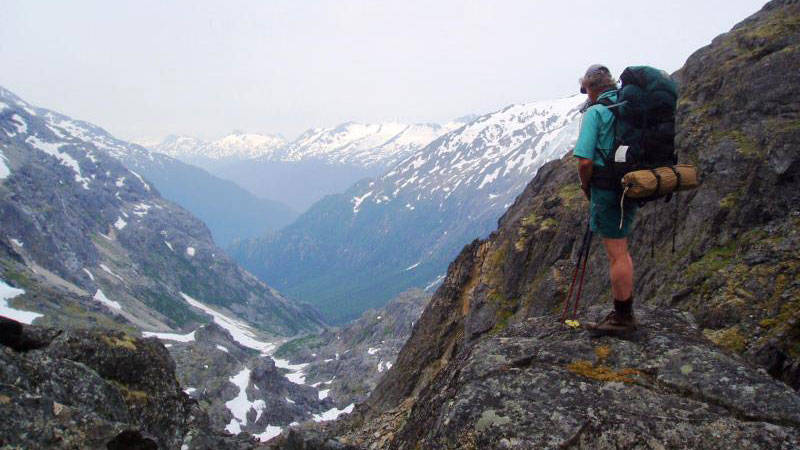 Summer is the traditional tourist season in Alaska. One national park site in the state attracts far more recreational visitors than any other. Can you guess which one?

Late in the evening on July 9, 1958, a magnitude-7.8 earthquake hit the coast of what is now Glacier Bay National Park. The earthquake originated along the Fairweather Fault, which runs along the shore and beneath a narrow fjord known as Lituya Bay. This seismic event triggered a massive landslide in the mountainous landscape surrounding the bay, plunging 40 million cubic yards of dirt and glacial ice 3,000 feet into the waters below.

The sudden impact from the landslide formed the biggest wave ever recorded — a tsunami that swept across the entire length of the bay, rose 100 feet above the surface of the water, and reached even higher altitudes of 1,710 to 1,720 feet after breaking on the shore. The tsunami uprooted millions of trees and stripped vegetation and soil from the landscape.

Lituya Bay is the only safe anchoring point for many miles along the rocky coastline and a common refuge for fishing boats; three boats were moored in the bay at the time of the disaster. The tsunami, tragically, killed two people in a boat that was carried out to sea. Four others miraculously survived and offered eyewitness accounts of the event.

One fisherman, Howard Ulrich, was anchored in the bay with his 7-year-old son. He later told the BBC, “What I observed was like an atomic explosion. … It looked like just a big wall of water.” He was able to ride the crest of the wave over the shore and back again toward the center of the bay, steering around debris to survive. Another couple was able to escape their badly damaged and sinking boat by deploying a small skiff that they had on board; they were rescued several hours later.

The 1958 tsunami was the largest by far of several giant waves documented at Lituya Bay since the mid-1800s, and legends by the native Tlingit people — who describe an evil spirit living in a cave under the bay, shaking the waters when disturbed — suggest that these kinds of natural disasters have been occurring in the area for generations.

The bay is prone to extreme waves in part because of its location on a fault line and in part because its waters are notably deep — up to 800 feet — and landslides from the surrounding mountains and glaciers displace unusually large amounts of water.

Scientists continue to study and monitor the coast of Glacier Bay and the dynamic forces that shape it. Learn more about the park’s geology on the National Park Service website.