Long-time environmental advocate Audrey Peterman shares inspiration, thoughts on diversity, and information on her new book, which she describes as a “love letter to the parks.”

In 1995, Audrey Peterman and her husband Frank packed up their car and traveled 12,000 miles to national parks around the country for the first time, despite the protests of family and friends who worried for their safety.

For two months they had life-changing experiences in places where they were often the only African Americans in crowds of people. They went on to become passionate environmentalists, helping to break down barriers between people of color and the national parks, and building inroads for more diverse voices in America’s traditionally white environmental movement. The couple chronicled these experiences in their 2009 book, Legacy on the Land.

Now, Audrey’s new book, Our True Nature, takes readers on a different kind of journey through a rich cross-section of the park system, with stories, photos, and enthusiasm for 57 of the country’s greatest places. We asked Audrey, a past recipient of NPCA’s Marjory Stoneman Douglas Award and four-term NPCA board member, to share some of her inspirations and insights with us.

Q: Our True Nature feels very different from Legacy on the Land—more general in its subject matter, like a travel guide that anyone could pick up to learn more about the parks.

Audrey: That was actually my goal, to make this book issueless—a love letter to the parks.

Legacy on the Land was our journey of discovery. I literally fell into the national park system by accident, and then I couldn’t stay out! When I found that there was so much resistance and misunderstanding [about the relationship between people of color and the parks], Legacy echoed our challenges and frustrations. But with this book, I just decided to pour my heart out with love. People are so overwhelmed with issues. I really just wanted to use the power of love and beauty to inspire people.

Q: Of course, you explore themes of diversity, but not on every page. It really is a mix of different places throughout the country.

Audrey: That’s what the park system is all about! It’s got our collective history and all of the beauty and splendor of the natural world, and it tells the story of how we got here together.

Q: How did you narrow the book down to 57 parks? That must have been a difficult process.

Having the imprint of such monumental natural wonders on my spirit gives me perspective on how infinitesimal I am in the world, and yet how important. … My demeanor is always centered in the knowledge that there’s something so much bigger than myself.

Audrey: It actually wasn’t. I didn’t focus as much on the ones that were in Legacy. For example, Mammoth Cave, which gets a lot of ink in Legacy, doesn’t appear in this book at all.

Q: But Badlands does.

Audrey: Badlands does, but it’s a new story. It’s a story about how the parks don’t just protect the natural resources that are terrestrial, but also the ones that are extraterrestrial! I didn’t even know there were parks protecting our dark skies. That made such an impact on me, seeing the Milky Way from horizon to horizon. We all live under the same sky, in such a small fraction of the universe.

Q: I know one of your goals is convincing new people to explore the parks. How do you do it?

Audrey: If you know my personality, it’s big on parks. If I’m in the supermarket or the gas station, the Grand Canyon and the Everglades are always working their way into my conversations. I talk to everybody, because that’s the kind of person I am.

It’s amazing to know that when people think about these places, they think about them as being far away. And I’m saying, are you kidding me? Wherever you are, there’s a park unit nearby. [Or people] might say that it’s going to be expensive, and I tell them that for eight dollars their whole car can get in, and some parks don’t even have an entrance fee. If they’re 62 or older they can get a park pass for ten dollars that’s good for the rest of their lives. That blows people’s minds!

It’s just providing information and leadership—and saying what the benefits are. They’re astronomical!

Q: What have some of those benefits been for you? 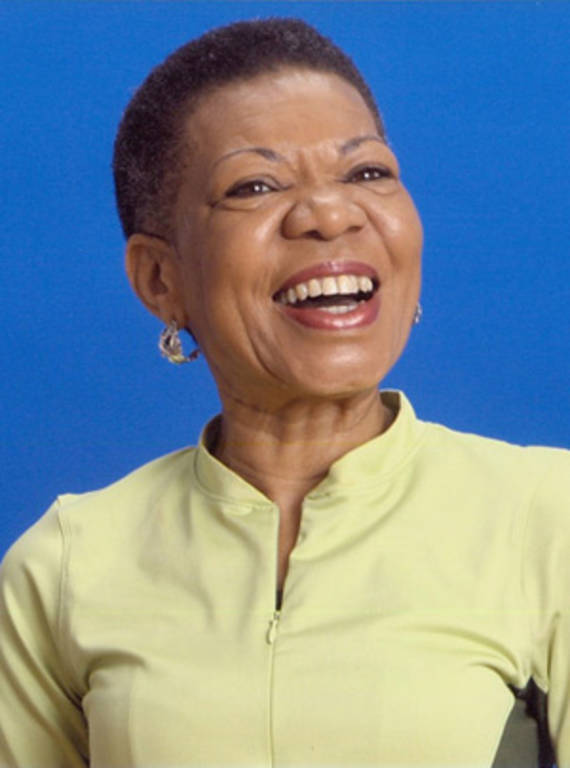 courtesy of the author

Audrey: When we were at Yellowstone, we were looking at a burned part of a mountain and Frank said, “Oh, that must have burned in the fire of ’88.” The white man standing next to us said, “Yes.” He pointed and said, “When my father brought me as a child, they were building over there. When I brought my son, they were building over there.” Now, he had retired and was back for his third time. I saw a shadow pass across Frank’s face. Later, when I asked him, he said, “I don’t live my life with any regrets, but as that man was talking, I realized that I had really shortchanged myself and my children because I had not taken them to see these places. He and his family know this country. They have a sense of ownership. We don’t.” So I said, “We’ll take our children and our grandchildren now.” To extrapolate from that, I’ve been trying to take the whole country!

My girlfriend came to visit and we decided to take a trip down to Everglades one Sunday. I’ve been to the Everglades five hundred million thousand times, and yet on this trip, there were places I’d never been before. At the end of the day, she said, you know, I want to put this park in my estate plan, and I want to volunteer here. That’s the kind of response that the parks evoke in people. You know how she described it? She said, “It feels like I’ve had a forest bath.” I thought that was such an unusual way of putting it. What she was saying is that she felt she had just been washed clean.

Q: I get a sense you have a real spiritual connection with nature.

Audrey: Having the imprint of such monumental natural wonders on my spirit gives me perspective on how infinitesimal I am in the world, and yet, how important. I am part of everything. Though a small part, I am connected to everything. It allows me to take a step back from whatever challenges I’m experiencing. My demeanor is always centered in the knowledge that there’s something so much bigger than myself.

Q: Do you think the parks have become more diverse since you started exploring them in 1995?

Traveling through the park system, I get a bigger picture of what America really is. It is so much more inclusive of all the races. Everybody has contributed to the greatness of this country.

Audrey: Exponentially. In the early days, when I saw black people in the parks, I would run up to them and would have to find out all about them, because I was just so excited. But now, if I were to do that, I’d be running up to people all the time!

Now there are so many groups that have arisen around the country. Rue Mapp and Outdoor Afro are continuously introducing people to the parks in the California area. Dudley Edmondson, the noted wildlife photographer and birder wrote the first book about people of color in the park system and the environmental movement. The most exciting of all is Juan Martinez. Juan is a young Latino man who grew up in a rough part of L.A. He got in trouble in school and had a choice between failing a class or going to Eco Club; he chose the Eco Club. [Later,] he got a chance to go to Grand Teton National Park, where he saw the stars for the first time. The impact that it had on his life was so transformative that he has devoted himself to conservation and getting other young people in nature and the parks. And you know what he was named last year? National Geographic Emerging Explorer.

Q: That must feel really hopeful, looking forward to the next generation of leaders.

Audrey: Hopeful? It’s not hopeful. It’s affirmative! Give people the exposure and the opportunities, and we’re there.

Q: What about environmental institutions that have traditionally disregarded diverse voices? Do you think things are getting better?

Audrey: Well, there are individuals who care very passionately. [But] people live by certain prevailing myths. A myth has grown up in America around the enjoyment and protection of natural resources and our public land system. That myth says that people of color are not interested, not suitable—just not. It doesn’t matter how much you demonstrate that isn’t true. The power of the myth is so deep that it overrides facts and intelligence. That is the myth that is holding us up. It’s holding us back.

In this increasingly multicultural society, I keep hearing people who call themselves environmental leaders say, “We’ve tried so hard [to get people of color involved], and it’s just not happening.” Look at all the people across the country who are really, vigorously doing this work. But the myth overrides the reality.

So many business leaders serve on boards in the environmental sector, and I wonder, if they saw that the fastest-growing demographic group was not using their product or service, what would they do? Do you think they would sit around and say, “Well, we tried to reach them one time in 1978 for a couple of months and that didn’t work”?

What I am saying now to environmental organizations is this. By 2042, people of color will be 50 percent of the population. Even if every white person in the country was dedicating themselves full-time to the environment, if the other 50 percent doesn’t know or care, how are our issues going to survive?

Q: Do you think there’s a positive trend?

Audrey: My ambition is to see the day when all Americans love our national treasures the way I do. It makes us feel a little more loving of ourselves, a little more accepting of ourselves and others, to realize we are part of something so glorious. The park system did that for me, so I know it can do it for other people.

I really think a lot of the friction in the country comes from the fact everybody thinks that they know what America is [but they only see part of it]. Traveling through the park system, I get a bigger picture of what America really is. It is so much more inclusive of all the races. Everybody has contributed to the greatness of this country.

I’m ready for things to change. Seventeen years later, I do see signs of change, but I’m hearing some similar attitudes in places of leadership, which is very disconcerting.

If it’s imperative, you have to find ways to do it. If you haven’t made strides in capturing the loyalty of another 50 percent of the population, then how are you going to survive? Some things cannot wait. That’s what leadership means, right?