The Famous Landmark the Park Service Almost Encased in Plastic

The National Park Service’s mission includes preserving the natural resources in our parks. In the 1950s, officials at one Southwestern national park nearly took this mandate to extremes by coating one of the country’s most recognizable geologic formations in plastic.

Delicate Arch in Arches National Park is one of the most recognizable rock formations in the country. It has adorned Utah’s license plates for more than 20 years, and millions of viewers around the globe got a glimpse of the orange sandstone feature in February 2002, when an Olympic torchbearer standing below the arch welcomed the world to Utah for the Salt Lake City Winter Games.

Delicate Arch is famous, but it’s also, well, delicate, and the forces that carved it will continue to wear it away until it collapses (as was the fate of the Azure Window, a limestone arch on the coast of a Maltese island that collapsed earlier this year during a storm).

The Park Service has long known about the arch’s fragility, and in the 1950s, park staff considered some drastic measures to stave off the inevitable. “Not surprisingly,” Edward Abbey wrote in “Desert Solitaire,” “there have been some, even in the Park Service, who advocate spraying Delicate Arch with a fixative of some sort — Elmer’s Glue perhaps, or Lady Clairol Spray-Net.”

The book, which Abbey wrote while working as a park ranger at what was then Arches National Monument, was published in 1968, but it wasn’t until years later that Jim Stiles, himself a ranger at Arches and a friend of Abbey’s, found the story behind the quote.

“When I first read that passage by Abbey, I thought he was kidding,” Stiles wrote in a detailed account of park officials’ deliberations over the merits of coating Delicate Arch with a plastic resin. “I learned, over the years, to take some of Cactus Ed’s ‘facts’ with a grain of salt.” 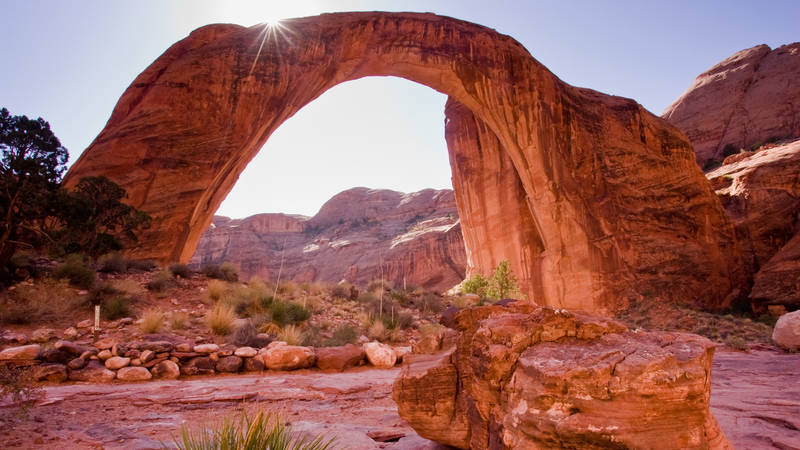 From mysterious gliding rocks in Death Valley to fossils of some of the most ancient life forms in Glacier, here are 11 lesser-known geologic wonders—including a few personal favorites from…

But while going through some file cabinets at the park, Stiles came across a government report titled “Delicate Arch Stabilization Project.” As Stiles explained in Canyon Country Zephyr, the independent publication he started in 1989, a park official first raised the alarm in 1947 about the fragile state of Delicate Arch’s eastern leg and recommended that something be done to stabilize the rock.

Various Park Service administrators weighed in over the following years, and in late 1952, the region’s superintendent said it was time to act. “To allow this unique formation to fall without making some effort to prolong its existence would be to lose forever an integral part of the story justifying the existence of Arches National Monument,” he wrote.

A landscape architect warned that stabilizing the arch would cost a lot of money and that the work itself might damage the rock, but stabilization enthusiasts started discussing the best materials to use. The silicone the park had on hand was deemed too old, though. Bates Wilson, the park’s superintendent, later said that several trial chemicals turned white or scaled off, so they were rejected. Perhaps because of Wilson’s own skepticism of the project, it eventually died.

So far, Delicate Arch has withstood the assaults of the water, frost and wind that helped create it. The rock formation has also survived human abuse, including an ascent by at least one climber in 2006. (The park prohibits climbing any arch with an opening greater than 3 feet.)

One day, it will suffer the fate of Wall Arch, which collapsed one August night in 2008, but until then, it will continue to inspire awe among those willing to make the 3-mile hike.

#{image.caption}
Wall Arch, shown before and after its collapse in 2008.   National Park Service photos.

“A weird, lovely, fantastic object out of nature like Delicate Arch has the curious ability to remind us — like rock and sunlight and wind and wilderness — that out there is a different world, older and greater and deeper by far than ours, a world which surrounds and sustains the little world of men as sea and sky surround and sustain a ship,” Abbey wrote. “The shock of the real. For a little while we are again able to see, as the child sees, a world of marvels.”