Santa Monica Mountains for All

The Santa Monica Mountains belong to all of us. Expanding its boundaries will make it more accessible to children of color and people living in poverty.

The Santa Monica Mountains are L.A.’s backyard, but for children of color living in poverty with no access to a car, they may as well be worlds away. Expanding the largest urban national park in the country and creating adequate public transportation to the park will bring this resource to all our children.

The Santa Monica Mountains National Recreation Area, with 150,000 acres of mountains and coastline, provides a seamless network of federal, state, and local park lands, with places for physical activity and habitat for people, 450 animal species, and 26 plant communities. If the National Park Service expands the boundaries under its Rim of the Valley study, the national recreation area could have over four times more green space—going a long way toward ensuring access for park-poor, income-poor communities where children of color disproportionately live. 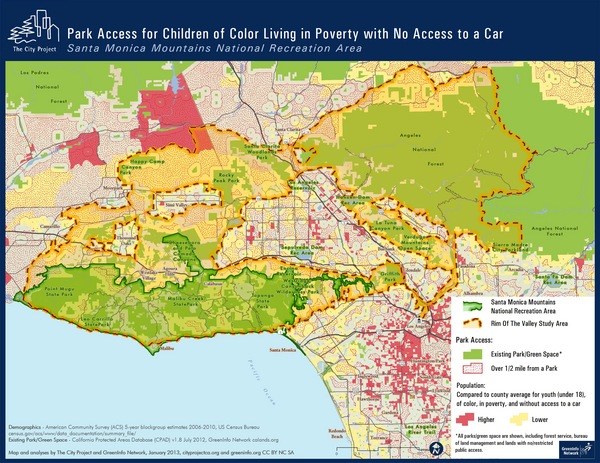 A remarkably diverse and growing alliance of advocates for equal justice, public health, and green space have submitted comments to the Park Service to diversify access to and support for the expanded national recreation area.

According to the Park Service, the expanded recreation area would “provide more recreation opportunities and ecological connections with an emphasis on creating better connections for a broad range of urban audiences including many who are underrepresented in national parks and underserved by state and local parks.” We applaud the Park Servivce for this approach. 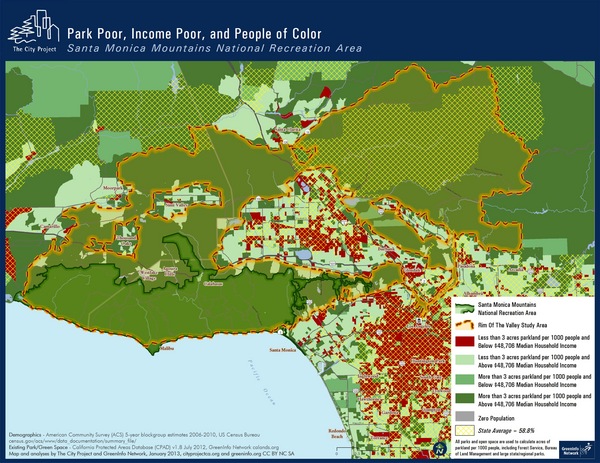 The expanded national recreation area can help get people back to work and strengthen the economy in the worst economic crisis since the Great Depression. Latinos and African Americans have been worst hit by joblessness and drops in wealth. Communities face unemployment levels of over 13%. Local green jobs through diverse training, apprenticeship, and stewardship programs and partnerships with nonprofit advocacy organizations can help. The boom, not the present slump, is the time for austerity. If you want parks, work for jobs–and justice.

Children of color suffer disproportionately from obesity and diabetes, and are the most at risk for antisocial behavior including gangs, crime, drugs, and violence. “Access to safe, healthy environments for exercise and recreation are crucial for all communities,” according to Scott Chan of the Asian and Pacific Islander Obesity Prevention Alliance. “Seven out of 10 Native Hawaiian/Pacific Islanders are overweight or obese in California (highest of all racial and ethnic groups), followed by nearly five out of 10 Philipinos. Asian and Pacific Islanders had the highest increase in Type 2 diabetes—a 68% increase from 1997-2011. Given these grim statistics, we should be further motivated to increase access to healthy spaces and healthy opportunities whenever and wherever possible.”

Park and health disparities are exacerbated by a lack of transportation. There is no good way to reach the mountains and forests in the Los Angeles region using transit. An expanded recreation area could meet these diverse needs through a fully funded, balanced expansion that includes Transit to Trails, hiking, biking, and camping, as well as active recreation including soccer, baseball and other sports fields, complete green streets with biking trails and safe routes to school, and joint use of parks, schools and pools.

NPCA urges the Park Service to “create new and enhanced education, interpretation and collaborative programs that engage Los Angeles’ diverse cultures and unique natural environment,” according to California Desert Field Representative Seth Shteir. NPS should also "expand Transit to Trails and similar community engagement programs to take inner city youth and their families and friends on fun, educational and healthy hiking, biking and camping trips to mountains, rivers, and other natural green spaces for no or low cost.“

The Park Service needs to work with agencies operating within the national recreation area so those agencies know their obligations under equal justice laws and principles, and the public receives the benefits to which they are entitled. For example, the California Department of Parks and Recreation consistently refuses to acknowledge that equal protection laws apply to all its programs and projects, maintaining incorrectly that if the specific project is not federally funded, the laws do not apply. And Malibu has long been a hotbed of activism to privatize public beaches and lands. Beaches and the coastal zone must remain public for all.

Celebrating diverse cultural, art, and heritage sites and Native American sites would benefit all people. According to Secretary of the Interior Ken Salazar, "Less than 3% of all the national landmarks … are designated for women, Latinos, African Americans or other members of minority groups.” The Park Service should conduct a thorough survey of relevant places in and around the expanded national recreation area to designate monuments that celebrate diversity, democracy, and freedom.

President Obama has designated the Los Angeles and San Gabriel Rivers as national priorities as part of the America’s Great Outdoors or urban waters initiatives. The expanded national recreation area can serve those priorities and the needs of the people by linking green space and cultural sites from the Santa Monica Mountains on the west side to the Angeles Forest on the east. Linking an expanded Santa Monica Mountains National Recreation Area and the proposed San Gabriel Mountains and River NRA would help make the classic Olmstedian vision for Parks, Playgrounds and Beaches for the Los Angeles Region.

The people of Los Angeles have the opportunity to work with the Park Service to expand the Santa Monica Mountains National Recreation Area to make this dream of green justice come true for all our children.

This story originally appeared on KCET.org.