For historical reenactors in Lexington and in Minute Man National Historical Park, the past is present.

Along the streets of Lexington, Massachusetts, flashlights and white plastic buckets bob in the dark. A hazy spring moon still hangs over First Parish Church as everyone in town heads to the Battle Green.

By 5:30 a.m., hundreds flank the common: spectators in New England Patriots sweatshirts, sleepy kids, dogs. The buckets, flipped over, become platforms for shorter observers. Around daybreak, a few dozen militiamen muster on the grass, responding to Paul Revere’s warning: “The regulars are coming out!” The men wear tricorn hats and breeches and grip hunting muskets, just as they would have on April 19, 1775.

Soon a column of British regulars in blazing red jackets files onto the green, and the crowd readies cameras and phones. A shot rings out. Then, bedlam. Volleys of gunfire, the sharp smell of powder, rehearsed confusion and huzzahs. Midfield, a man is bayoneted dramatically. “Go back to Boston!” one colonist snarls, drawing laughs.

Within minutes, the skirmish is over. Women in bonnets rush out to tend to the wounded and mourn the eight men who perished. The colonials retreat; the redcoats will continue on to Concord and the Old North Bridge, where a group of Minute Men — the best-trained members of the colonial militias, ready to turn out “in a minute” — first returned fire on the king’s army 242 years ago. The American Revolution has begun, again.

Staged each year on Patriots’ Day — a holiday observed only in Massachusetts, Maine and Wisconsin — the Battle of Lexington is one of the oldest battle re-creations in the country, first held as early as 1825. Each year in Lexington and nearby Minute Man National Historical Park, the days around the April holiday are packed with military demonstrations, parades and ceremonies honoring the people and actions that sparked the Revolutionary War. But the lineup also represents the “Super Bowl” of living history events for hundreds of reenactors from across New England. Around 20 militia units and eight “British” regiments converge on the area’s historic sites to perform, trade notes and educate the public.

“You can read a book and understand it intellectually, but what reenactment does is it engages your imagination. People can imagine themselves in the story. It pulls them in,” says Jim Hollister, a park ranger and lead interpreter at Minute Man, which preserves around 1,000 acres and 11 “witness” houses along a 5-mile stretch of the Bay Road, where on April 19, 1775, militias pursued British forces in a 16-mile running battle back to Boston. By the end of that day, 49 colonials and 73 regulars were dead.

After the smoke clears in Lexington, people spill onto the common to mingle with reenactors or wander off to all-you-can-eat pancake breakfasts at nearby churches, another yearly tradition. I approach a man in a brown smock and round brim hat with a silver ponytail. It’s Asahel Porter, a merchant from Woburn, Massachusetts, and one of the war’s first casualties. He’s also known as Chris Hurley, a Lexington computer programmer. He introduces me to his wife, Abigail, portrayed by his actual wife, Clare Hurley. An editor at Brandeis University, Clare says her husband “reluctantly got dragged in” to their shared hobby but quickly became hooked.

The couple has done impressions together for 10 years, volunteering at Minute Man sites and with the Lexington Historical Society, where Clare sings with a group that performs period music. But the Battle of Lexington is their highest-profile event, and probably the most intense. On the green, Clare says, the line between role-play and reality can blur. “Every year, I genuinely cry at his death. At first I’m pretending to cry for the audience, but before I know it, it feels real in some dimension.”

Nearby are two British soldiers from His Majesty’s Tenth Regiment of Foot — Shaun Timberlake from Quincy, Massachusetts, and Chris Migala from Chelmsford — looking much friendlier than they did 20 minutes earlier. Timberlake, a captain, wears white gloves, a coat with fringe at the shoulders and, beneath his throat, a decorative silver plate called a gorget. Migala, who also serves in the Massachusetts National Guard, says reenacting can be a “sizable investment” of time and money. Many groups meet and drill at least once a month, and a high-quality period outfit might cost $500. But why fight for the Crown? “It’s the spit and polish,” Timberlake says.

“Type A, Type B,” explains Paul Dooley, of Medford, Massachusetts, contrasting the regulars’ uniformity with the casual look of militiamen, who were mostly farmers and tradesmen. Their clothing and gear — at least at the start of the eight-year war — were motley: coats of various colors and styles, non-military arms. Dooley wears the standard brick-red coat of a British grenadier and a tall bearskin hat called a busby. “It’s definitely a different mindset.”

“That’s how perfectly nice guys slip into the dark side of the force,” says Samuel Forman, a physician and 22-year member of the Lexington Minute Men.

Forman says he’s also experienced a “reenactment high” — a bending of time during military events. “The present kind of fades away. It can be sheer terror: The British are coming at you, you know that they’re firing blanks, but you’re so into it that you feel you’re there.”

Later, I meet two finely dressed colonials outside of Peet’s Coffee. Bob Allegretto, a retired shop teacher, and his friend, Jonas Brown, came to Lexington to engage with curious spectators. “As an educator, you want to share what you learn,” Allegretto says, swigging coffee from a 1770s-appropriate metal mug. 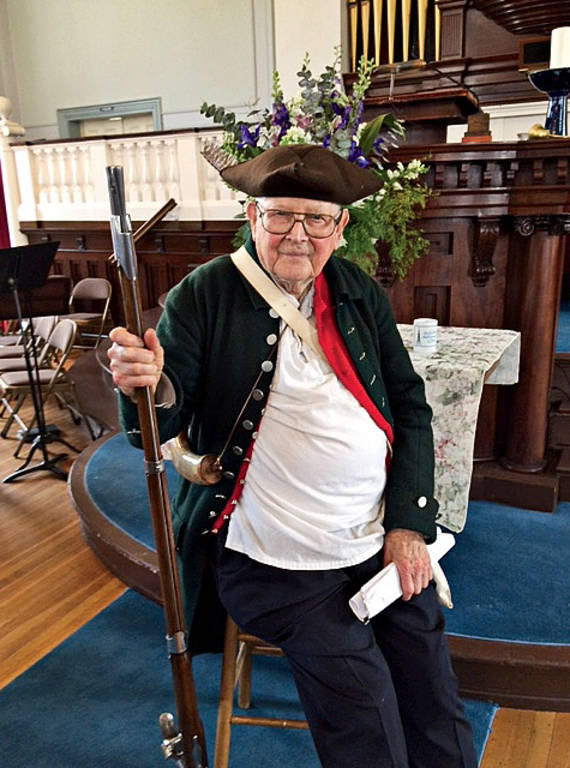 Dan Fenn, 94, is a longtime Lexington Minute Man who has participated in the dawn reenactment around 25 times. He now gives a historical talk every Patriots’ Day.

Like many reenactors, Allegretto and Brown were first drawn in by Civil War history, but their interests later expanded. “It’s not just about the guns and battles,” Allegretto says. “It’s about learning how people lived, what they did for a living, what they wore.” The two friends hand-stitch all their clothes based on meticulous research, and even their homes are around 300 years old. “So how seriously do we take it?” Allegretto asks. Brown answers: “We live it.”

Such obsession with period authenticity is common in the reenactor community, where conversations veer from the physics of musket balls (they arc) to the fact that colonial women’s dresses were secured with pins, not buttons, to accommodate pregnancy.

Still, for some, historical fidelity has its limits. Unlike Lexington (which sits just beyond the boundary of Minute Man), the National Park Service doesn’t do true battle reenactments, only “tactical demonstrations,” with no mimed deaths. “We don’t portray casualties, out of respect. That’s inconsistent with the memorial qualities of the battlefield under our care,” says Hollister. “These were real people. They lost their lives. Their families were thrown into turmoil and grief.”

This sense of reverence led Hollister to organize the Patriot Vigil, a new event this year, as a quiet counterpoint to the weekend’s action and fanfare. The next evening at dusk, around 100 people gather outside North Bridge Visitor Center, most of them in colonial garb. I spot Chris and Clare Hurley, who seem almost out of place in fleece and sneakers, though like the rest of the crowd, they carry antique lanterns. As the fifers warm up, a man shows us his wife’s homemade candles. Among the chatting reenactors there’s a feeling of reunion, or at least recognition. “I know faces because we see them across the battlefield,” Clare says.

Hollister soon commands us to step off: “Attention battalion, march!” Two by two, we walk down a sloping path to the slow beat of muffled drums, lanterns trailing in long rows. On the Concord River, geese honk in the reeds. We pass the Minute Man statue by Daniel Chester French, who also designed the Lincoln Memorial statue, then cross the reconstructed bridge where the colonies’ first shots of the Revolution were fired. After breaking ranks, we listen as speakers read a poem, a blessing and finally the names of the colonial and British dead. As the readers’ faces glow under bonnets and felt hats in lantern light, the effect is transporting.

Before the fife and drum corps plays “Parting Glass,” an 18th-century tune, we observe a moment of silence for those we’re honoring. Their story, Hollister reminds us, is still being lived out. “The next chapters have always been for us,” he says, “for we the people.”