The ‘garbage collectors’ of the Everglades have a strange penchant for munching on windshield wipers. Can park staff stop them?

Adam Gelber set out so early one winter morning a few years ago that by the time he arrived at the Flamingo Marina in Everglades National Park, it was still pitch black. He couldn’t see any birds or hear even a single bird chirping. So when he came back hours later from his fishing trip into the waters of Florida Bay, the environmental consultant was in for a shock. As he walked across the parking lot, he first noticed “a whole lot of bird poop” all over his pickup truck. Then he saw the rubber seals torn from his sunroof and dangling from his windows. When Gelber saw a couple of black vultures lurking nearby, he thought he was looking at the likely perpetrators.

“It was a really solid piece of work by the vultures,” said Gelber, whose GMC Yukon suffered $2,500 of damages. “It kind of put a damper on a nice day of fishing.”

While vultures’ car attacks were sporadic at Flamingo at that time, they had already ballooned into a major problem at Royal Palm, the starting point for the popular Anhinga Trail. Park rangers were puzzled by the vultures’ behavior, but by 2010 they had received so many complaints that they decided to take action. Staff, even with the help of a dog, couldn’t shoo away the birds all day long, and motion-activated sprinklers would have doused more visitors than vultures. Eventually, park officials decided to use a tactic that had succeeded elsewhere: hanging dead vultures from nearby trees. It dispersed the vultures at first, but the carcasses didn’t last long in the Florida sun, and rangers found themselves fielding lots of questions from intrigued and alarmed visitors. Also, after a while, the vultures were no longer bothered by their dead brethren. Park wildlife biologist Lori Oberhofer has thought about providing vultures with spare tires and other pieces of rubber to poke at, but she’s worried that it would attract more vultures to the parking lot.

Instead of trying to change the birds’ behavior, park staff figured it might be easier to get people to adjust theirs. Since 2011, the park has been providing visitors with plastic tarps large enough to cover car roofs and windows, as well as bungee cords to secure them to the vehicles (they are now also available at Flamingo). Complaints have subsided, but Oberhofer said she’s observed vultures pick at rubber through the tarp, and she’s concerned that covers might not be a lasting solution. 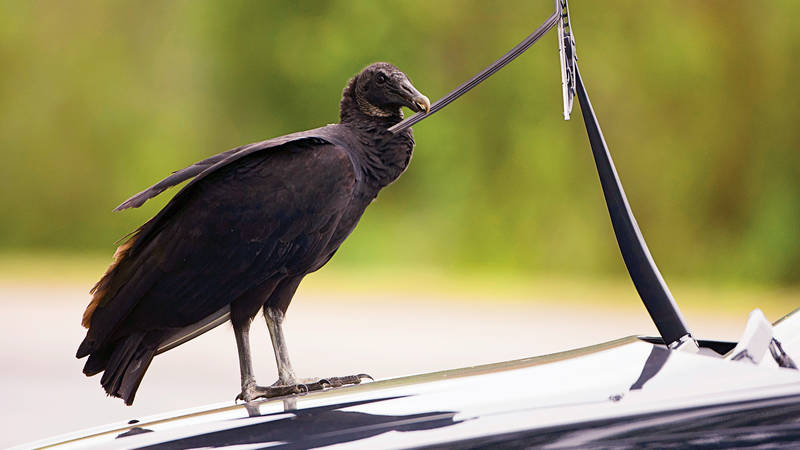 Black Vultures are damaging visitors’ cars at Everglades National Park, and park rangers are puzzled by the birds’ behavior.

Vultures play an important ecological and sanitary role, disposing of dead animals quickly and reducing the risk of diseases spreading. “They’re the garbage collectors,” Oberhofer said. Researchers estimated that the decline of the vulture population in India, for example, resulted in $34 billion in additional health costs over a 14-year period because rabies infections increased significantly after feral dogs replaced vultures as scavengers.

U.S. populations of both turkey and black vultures also plummeted during the 20th century, but they’ve rebounded since the 1970s when the use of DDT was discontinued — the chemical pesticide had led to thinner eggshells that adult birds crushed when they sat on them — and raptors were afforded protection under the Migratory Bird Treaty Act, which generally prohibits people from hunting, capturing or killing listed birds. Oberhofer estimates that more than 1,000 black and turkey vultures now take up residence every winter at Buzzard’s Roost, a large cypress dome south of Royal Palm. Smaller groups of vultures roost in tree islands elsewhere in the park.

To figure out whether the park’s winged vandals were locals or transients, Everglades partnered with the U.S. Department of Agriculture’s wildlife research field station in Gainesville, Florida, to tag more than 300 black vultures. The park’s wildlife staff and USDA biologists baited them with dead pythons and placed large numbered tags on the birds’ wings (leg bands are not appropriate for vultures because they often defecate and urinate on their legs to cool themselves and kill bacteria, and the acidic mixture can corrode the metal and injure the birds). The data showed that a few birds traveled more than 200 miles from Everglades — including one spotted at Disney’s Animal Kingdom near Orlando — but most of the tagged vultures appeared to stay in or close to the park, said Michael Avery, a USDA wildlife biologist.

For the past 15 years, Avery and his team have been working on developing nonlethal ways to minimize human-vulture conflicts, and they’ve been busy. The birds frequently roost in large numbers on communication towers, residential trees and roofs, tearing shingles with their beaks and depositing layers of ammonia-scented droppings. Some vultures have even been known to destroy plastic cemetery flowers. Black vultures have attracted extra scrutiny because they occasionally prey on newborn calves, piglets and lambs, and some people have accused the raptors of going after their pets.

Avery has found that hanging dead vultures and made-in-China vulture effigies often work well to disperse roosts, and lasers and pyrotechnics can help, too. (Oberhofer said she just bought an “industrial-strength” laser pointer.) But figuring out why black vultures attack cars’ rubber and vinyl parts has been more challenging. Even though vultures ingest little of what they tear apart, Avery first suspected vultures were attracted to certain compounds in the rubber, but when he tested the hypothesis, the results were inconclusive. “We’re not really sure why they do this,” he said.

Keith Bildstein, the director of conservation science at Hawk Mountain Sanctuary in Pennsylvania, has a theory. He pointed out that kea, sheep-eating parrots in New Zealand, also chew on cars’ window seals, and he’s observed the same behavior among striated caracaras in the Falkland Islands. Bildstein, who recently authored a book about raptor behavior, said black vultures are very social birds that often feed in large groups where competition is fierce. The birds with the strongest backs and necks get the choice morsels, so it makes sense for vultures to exercise those muscles. Because rubber seals and wiper blades happen to have a similar consistency to dead animals’ muscles and tendons, he thinks black vultures have turned Everglades’ parking lots into their own private gyms.

“When you think about a bird for which every meal is a food fight,” he said, “you start to understand why they want to go into training.”