Bouncing Back in Yosemite

By Nicholas Lund
Summer 2017: Bouncing Back in Yosemite

After flirting with extinction, Sierra Nevada yellow-legged frogs are staging a remarkable — and unexpected — comeback.

The National Park Service biologist pulled another empty net out of the clear waters of Budd Lake, high in the mountains of Yosemite National Park, and April Kunieda saw some looks of disappointment creep over the faces of her students. No fish. The Bay Area high schoolers were there to help remove non-native trout, but on this particular trip, they kept coming up empty-handed.

“This is great, we’re part of some important science!” she reminded them. She wasn’t sure they were buying it. For the Sierra Nevada yellow-legged frog, however, bare nets at Budd Lake were another bit of good news in what had been an encouraging summer.

Summer 17 Bouncing Back in Yosemite 1 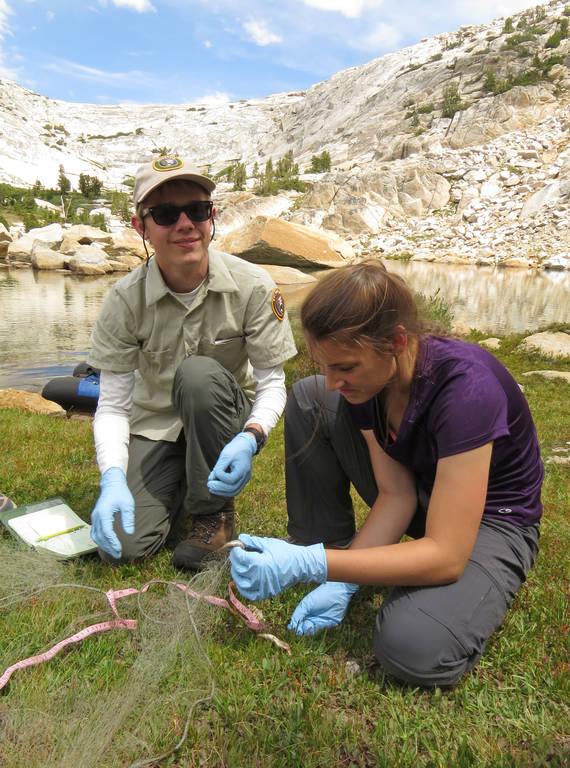 A new study has shown a dramatic rise in their population, which is a remarkable — and unexpected — turnaround for a species that was once nearly eradicated from the park. Based on more than 7,000 frog surveys conducted over a 20-year period, the study, led by Roland Knapp of the University of California’s Sierra Nevada Aquatic Research Laboratory, details the frog’s incredible recovery from predation by non-native fish and from a pathogenic fungus that is wreaking havoc on amphibian species worldwide. The study’s results provide a bright ray of hope for the endangered frog in the mountain ponds of Yosemite.

“That hopeful vision was something I’d largely lost sight of during the decades of frog declines,” Knapp said. “Obviously, the recovery we documented is just the beginning of what will be a long process, but suddenly a future in which these iconic animals were able to regain their place as the most abundant amphibian in the Sierra Nevada didn’t seem so impossible after all.”

Until settlers arrived, waterfalls and other impediments prevented fish from colonizing mountain waters, and so most of the streams and all the lakes in what became Yosemite National Park were naturally fishless. The first recorded instance of humans stocking trout in Yosemite waters was in 1877. Over the next century, according to Park Service estimates, more than 33 million individual fish were introduced into the park, first carried by hand and later dumped in large quantities from airplanes.

The Sierra Nevada yellow-legged frogs had no defense against the hordes of hungry trout that suddenly were sharing their lakes. The mountain waters were clear, without algae or mud to give small amphibians a place to hide, and the fish feasted. The harmful effect on the frogs was recognized as early as the 1920s, but it wasn’t until 1991 that fish stocking in Yosemite was officially halted.

The chytrid fungus thrives in a wide range of conditions, and it affects national parks around the country. The fungus has been found in parks including Acadia in Maine, Congaree in South Carolina and Zion in Utah, though the disease chytridiomycosis itself is not necessarily present in these parks. According to the Park Service, in less than one decade, populations of boreal toad (pictured above) along the Alaskan coast went from abundant to nonexistent, and scientists suspect the fungus might have played a role in the drastic decline.

Kunieda and other educators from the nonprofit NatureBridge take more than 13,000 students on environmental education trips to Yosemite every year. The group is a part of a multi-agency effort to remove non-native fish from selected lakes in Yosemite and the surrounding Sierra mountains that’s been underway since the mid-2000s. Some fish populations die out on their own, and teams of biologists and volunteers have used gill nets and electric shocks to take out other populations. Knapp’s study showed that in some cases, frog abundance in lakes where fish had been removed returned to levels of never-stocked lakes.

But the fish were only one of the threats to the frog population. A fungus called Batrachochytrium dendrobatidis, which leads to the deadly disease chytridiomycosis, is responsible for the significant decline or extinction of up to 200 species of amphibians around the world since 1980, and it threatens hundreds more.

Scientists think the fungus arrived in the Yosemite Valley in the 1970s and aren’t entirely clear how it spread. One culprit may be African clawed frogs, which were taken around the world for use in labs, as pets and even in early pregnancy tests. Chytridiomycosis is a nasty disease: It thickens the frog’s porous skin, preventing the frog from absorbing nutrients and, in some cases, from breathing. If they contract the disease, the amphibians nearly always die.

The toll from invasive fish and the fungus may have been exacerbated by habitat loss and pesticides that blew in from the nearby Central Valley. As a result, the Sierra Nevada yellow-legged frog had disappeared from more than 93 percent of its former range by the mid-2000s. The frog was placed on the federal endangered species list in 2014.

But in his study, Knapp discovered that many of the frogs in Yosemite are no longer succumbing to the disease. Although it is unclear whether the frogs are building a natural resistance to the fungus over time or whether more resistant individuals have been passing on that resistance to their offspring, populations of frogs are expanding despite continued contact with the disease. The fungus is still around, but the frogs aren’t so affected by it.

Scientists determined that the overall population of Yosemite’s Sierra Nevada yellow-legged frog increased sevenfold over the 20-year life of the study. Whether the frogs’ resistance to the fungus or efforts to remove the predatory fish contributed more to this recovery remains an open question.

In any case, Kunieda and her fellow educators will continue to trudge up to Budd Lake to help eradicate fish. It takes three years for the Park Service to declare a lake fish-free, creating the potential for a lot of empty nets and dispirited students. But the disappointment usually fades quickly.

“The students know that the important thing is that the frogs are recovering,” Kunieda said. “I’m happy to go back to that lake and have the same thing happen again and again.”