More than three years ago, a tweet came across NPCA’s account from Creative Action Network co-founders Max Slavkin and Aaron Perry-Zucker. Their proposal? To team up to encourage artists to re-imagine a historic New Deal program called the Federal Art Project that put the nation’s artists to work more than 75 years ago. The original program resulted in thousands of poster designs, many of which showcased our national parks and other treasured landscapes. The opportunity to refresh the campaign for a digital age was an offer that NPCA couldn’t refuse.

When we first began the partnership with Creative Action Network, which we largely promoted through our social media channels, we couldn’t begin to imagine that it would take off to the level it has reached. But the artwork started pouring in, and by the time we co-hosted a See America launch party in San Francisco in February of 2014, I was thrilled to see a room packed with national parks and art lovers of all ages. It was then that I truly realized what a special opportunity we had.

Fast forward to present day, the See America campaign has taken off and reached new heights, with more than 1,500 designs by over 450 artists from across the country and around the world! In 2015, NPCA recognized the tremendous role that the See America campaign has played in helping to inspire new national park supporters by honoring Max and Aaron with the Robin W. Winks Award for Enhancing Public Understanding of our National Parks.

See America adorns my home, with a Castle Mountains National Monument pillow on my living room armchair and keepsake book on my shelf, and my office, with a 2017 See America calendar and Golden Gate National Recreation Area and Hawaii Volcanoes National Park artwork on the walls.

Each See America artist has a unique connection to our national parks. I reached out to several of the artists to hear their stories. 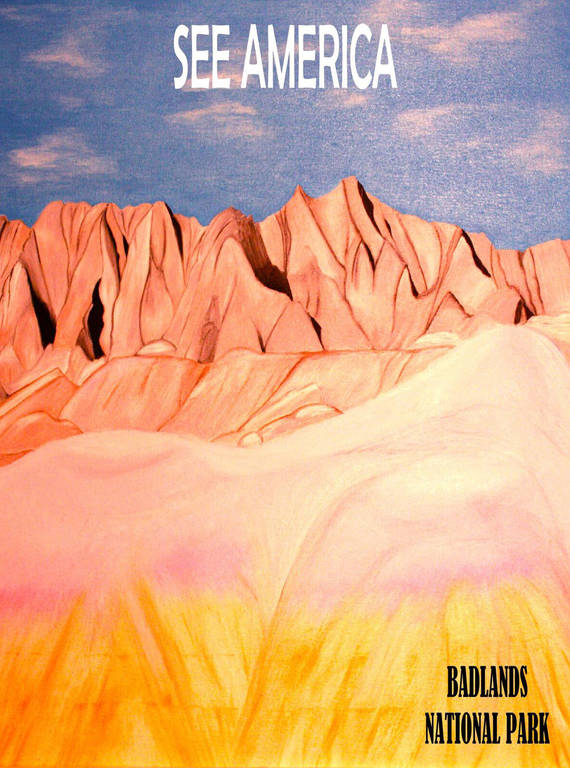 Bryan Bromstrup has created more than 100 national park designs for the See America Project, including this unique design, which he created by channeling his early memories of visiting Badlands with his parents. “I set out to explore the lay of the land a fair distance away from my parents,” he said. “At the nervousness of my mother, I explored a long thin stretch of path out over one of the vista stops along the Badlands Loop Road. As I got further away from my parents but closer to the natural wonder around me, I stopped to turn around and see that my mother is taking pictures of me. Of course, camera in hand, I immediately snapped a photo of her taking a photo of me. Both pictures continue to be two of our favorite memories of that trip.” A self-taught artist, Bryan began oil painting four years ago and continues to expand his techniques, in painting, photography, digital media and other mediums. 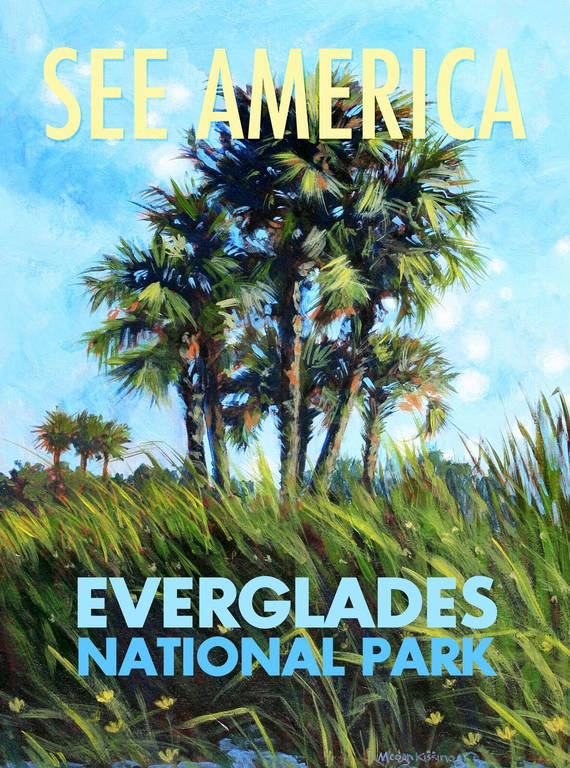 The inspiration for Megan’s design is a testament to the power of slowing down to take in the scenery. “I was driving and noticed the grouping of trees, under a perfect light that made me stop the car and take photos and sketches of them. … I thought it was the perfect piece because of the sunny, warm light and the bright blue sky of the landscape.”

Megan vividly describes the subtle beauty of her beloved Everglades National Park: “Green Anole lizards with their tiny pink dewlaps shining in the sun, Pink sabatia flowers growing in the flooded grass, great, lazy alligators sunning on the banks of the creek beds, millions of frogs chirping. And, my favorite: Swallow-tailed Kites making lazy dips over the hammocks searching for dinner.”

As a museum curator interpreting homes owned by Thomas Edison and Henry Ford, Megan relates to the importance of protecting parks. “National parks do the same thing in the wilderness that I do in the museum: they protect, conserve and preserve our natural treasures for mankind.” 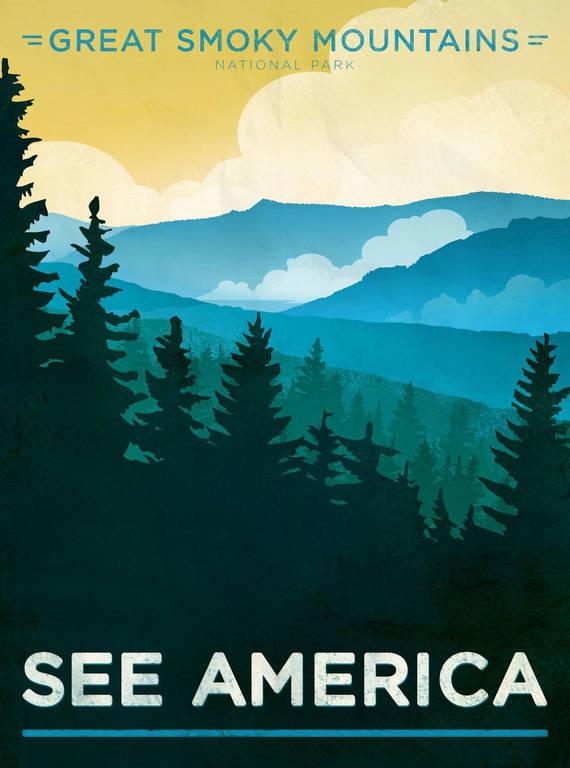 North Carolina-based artist Jon Cain has a long-standing love affair with our national parks, which he describes as all being different – but equally amazing. He and his wife married and spent their honeymoon at Great Smoky Mountain National Park, earning it a special place in his memories. When the See America campaign launched, Jon married his art and photography background with his memories of the park to create his unique design. Jon’s design also adorns the cover of the See America book. 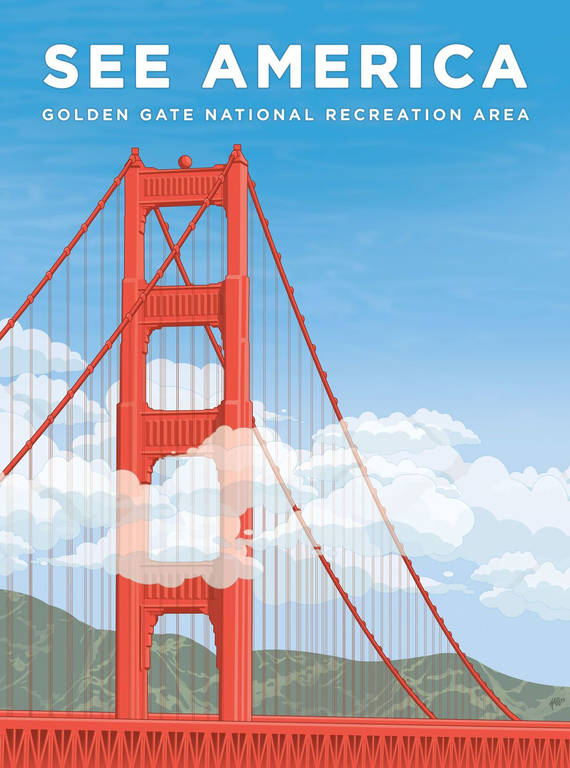 David Hays has spent more than a decade building successful campaigns and brand experiences for Fortune 500 companies, including Disney, Adobe, LucasArts, Nintendo and others. He has also lent his talents to the See America campaign, with his Golden Gate National Recreation Area design. “As a graphic design nerd and propaganda art enthusiast, I have tremendous respect for the original poster series by the Work Projects Administration for the United States Travel Bureau.” David draws his inspiration from “the union of art, copy and creativity in service of the greater good” and noted that ongoing threats to our national parks energize him to harness his talents to speak up for them. A call to action that he encourages all people to take, with their “voices, pens or paintbrushes.”

Asked about what inspired his See America design, David noted, “Living in San Francisco was one of the great chapters of my life, and the many trips I made to the Golden Gate National Recreation Area were memorable footnotes in the story. It made perfect sense to me to create a visual love letter to the city that still holds my heart.”

As a fellow San Franciscan and frequent visitor to Golden Gate, I can personally relate to his sentiment! 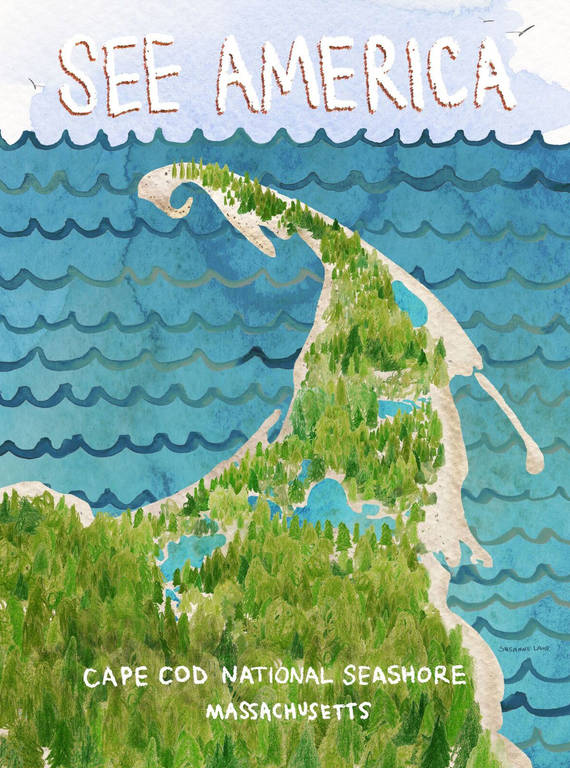 As is the case with many See America artists, Susanne Lamb drew from her childhood memories in her design for Cape Cod National Seashore. “I grew up on the lower Cape, and although my house was on the bay side, my high school was in Eastham, inside the national park! My memories of the park include beach bonfires and jumping into the freezing Atlantic, but also getting pulled over by a park ranger for going six miles over the speed limit on my way home from school.” While she now lives in New York City, Susanne notes that she has always considered the Cape her home. In addition to her personal memories and stories, Susanne credits Cape Cod’s allure to its “winding roads, sandy soil, wild turkeys, fresh and salt-water ponds, seashells, cranberry bogs, sand dunes, lighthouses, oysters, marshes, seabirds, beach plums, and whales.”

Susanne noted, “Each national park exemplifies how beautiful America can be when we pool our resources to protect and preserve land, rather than exploiting and developing it. If we can’t keep the most beautiful parts of our country clean and safe, what hope is there for the rest of it?”

Explore the full See America product line – and learn how to submit your own original design on the Creative Action Network website.