Could These Trees Disappear from National Parks?

A warming climate is altering the distribution of trees across the eastern United States, and species looking for colder temperatures may have nowhere to go.

#{image.caption}
The hemlock woolly adelgid, an insect from Asia that sucks the sap of the eastern hemlock, has decimated the tree's populations in Great Smoky Mountains National Park (above) and other national parks, leaving dead trees known as "gray ghosts." Warming temperatures are expected to favor the invasive pest and apply further pressure on hemlocks.   Photo © Ehrlif/Dreamstime.

That’s a difficult question to answer, but using data on anything from climate projections to soil composition and habitat fragmentation, scientists have built a model attempting to estimate trees’ vulnerability to climate change and how this could affect their projected distribution across the East Coast. What they found is that by 2055, eastern forests — including those in national parks — will probably look substantially different. While no tree species is in immediate danger of becoming extinct, some trees might disappear from specific areas within national parks — or from individual parks altogether. 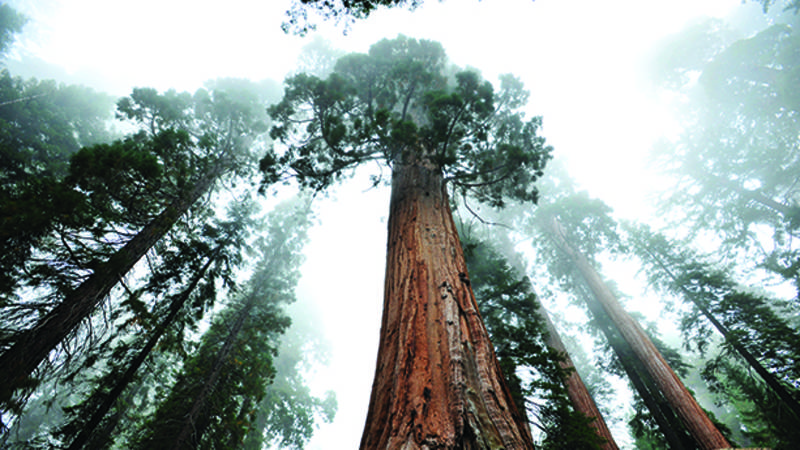 The national parks’ towering sequoias have thrived for thousands of years. Can they survive climate change?

NASA’s climate models predict an overall increase in temperatures and precipitation variability in the eastern United States over the coming decades, and those changes will affect the distribution of tree species across the landscape. Jon Jarvis, the former National Park Service director, called climate change the “greatest threat to the integrity of our national parks” and said it would force the agency to make difficult decisions. If Sequoia National Park is no longer suitable for supporting its namesake trees, for instance, the agency would need to consider how to transplant them to more suitable locations.

In simplistic terms, tree species can respond to warming temperatures by either migrating north (individual trees don’t migrate of course, but the range where new saplings establish themselves can change based on climate pressures) or moving up in altitude. The problem is that individual forests are separated by vast cultivated and urban areas, making it more difficult for tree species to slowly move northward. Trees that are already near the top of a mountain range, such as red spruce in Great Smoky Mountains, would have few options but to eventually die off and let more heat-resistant species move in.

“A lot of the northern species are projected to not do so well,” said Brendan Rogers, a scientist with the Woods Hole Research Center in Massachusetts. “You look at species like red spruce or balsam fir where they’re occupying the highest elevations — there is really no room for them to go.”

Rogers and two other researchers recently released a study of trees’ vulnerability to climate change across the Eastern U.S., incorporating data from three national parks — Great Smoky Mountains, Shenandoah and Delaware Water Gap National Recreation Area. The idea is to provide park managers information about which species are expected to suffer — or prosper — given the changes in climate that are coming to their area. This in turn will help them decide whether to let go of certain species that will no longer be suitable for a given park and prepare for the kinds of trees and forest ecosystems that are moving in as a result of new weather patterns.

For each of 40 tree species, the scientists calculated a vulnerability index that takes into account factors including the species’ sensitivity to climate change and its ability to migrate based in part on the number of seeds it produces and the distance the seeds would need to travel to a new suitable area. According to the researchers’ estimates, the five most vulnerable species in the East are balsam fir, quaking aspen, black cherry, yellow birch and red maple. A tree’s vulnerability can also increase if climate trends favor pests and diseases that target that specific tree.

The eastern hemlock, for example, has been suffering for decades from an invasive insect, the hemlock woolly adelgid, which sucks the tree’s sap until the needles fall off and the tree eventually dies. Cold winters keep adelgid populations somewhat in check, so warmer weather is not good news for the remaining hemlock stands in Shenandoah, Great Smoky Mountains and other eastern parks.

In Delaware Water Gap, the researchers found that the hemlock population in the northeastern part of the park is more vulnerable than the hemlocks in the south, which benefit from higher elevations. Because it takes a lot of effort to protect hemlocks from the adelgids through the application of insecticide, the release of predatory beetles and other methods, it’s helpful for park managers to know that over time the hemlocks in one part of the park are far less likely to survive so they can spend those precious resources on the hemlocks that do have a fighting chance.

“If you have a lot of confidence in those models, then as a Park Service manager you need to think about the time and effort you want to put into buffering those ecosystems from climate change versus potentially transitioning toward more adapted species or forest types,” said Patrick Jantz, a professor at Northern Arizona University and a co-author of the study. “They need to start being able to weigh some of these tradeoffs.”

Another potential application of the modeling would be when park managers decide what to do after a devastating fire such as the one that burned through part of Great Smoky Mountains late last year. The model predicts that that area will become more suitable for a pine-oak ecosystem as temperatures increase in coming decades. Knowing that, if park ecologists decide to restore that ecosystem, “they’d be managing with the grain, so to speak,” Jantz said.

#{image.caption}
A trail through a forest in Shenandoah National Park.   Photo © Jon Bilous/Dreamstime.

Jantz hopes the Park Service uses the data to make decisions not only at the individual park level but also within the whole National Park System. If a tree species is on its way out of a specific park, park managers could assist the migration of that species to another park so that it survives and thrives there. “If there were ecosystems that the Park Service was interested in preserving somewhere on park lands, then you would need an integrated network of managers communicating with one another about their ecosystems and how they’re expected to change,” he said.

The new models produce maps with a resolution of about half a mile, which means they lack the precision to predict anything that happens at a smaller scale, such as key changes in conditions on small ridges and hollows. This is a substantial improvement on earlier models from the U.S. Forest Service, but Rogers and Jantz hope that eventually the models can be calibrated with park weather data so that the resolution increases to about 100 yards, which is what park managers have said is necessary for managing forests effectively.

Some good news came out of the modeling: “The foothills of the central Appalachians in West Virginia popped out as a really resilient landscape,” Rogers said. “Trees don’t have as far to move. They can just go up the hill a bit.”

And while some northern species are expected to suffer even in areas such as Maine or the Adirondacks in New York state, they can always move to Canada where large intact forests remain.

Learn more about the study at the Wiley Online Library.