As a resident of the New York City area and the wife of a business school student, I’ve spent countless hours listening to my peers discuss which new mobile app or digital tool will revolutionize America and improve the quality of life for people throughout the nation. Yet, I remain convinced that one of America’s greatest products does not rely on software upgrades or Wi-Fi access to bring happiness to an increasing number of Americans each year. I’m referring to an island oasis filled with sun-kissed mountains, sandy beaches, and deep blue waters located off the coast of Maine: Acadia National Park.

Acadia National Park is located near the town of Bar Harbor on Maine’s Mount Desert Island and became a national park site in 1916. The region was initially inhabited by the native Wabanaki people and the first Europeans settled in 1763. Since then, Bar Harbor has been home to such prominent Americans as John D. Rockefeller, Jr., who invested millions into Acadia. Most notably, he financed, designed, and directed the construction of an innovative 50-mile network of carriage trails throughout the park between 1915 and 1933. Like all great businessmen, Mr. Rockefeller recognized the significant value of Acadia and was dedicated to increasing the public’s access and exposure to this national treasure.

Mr. Rockefeller made a commitment to public access in Acadia that continues to this day. With a generous contribution from Nature Valley, NPCA recently partnered with Friends of Acadia, a leading organization in grassroots park stewardship, and the National Park Service (NPS) to help fulfill the goal of completing Village Connector Trails to provide better access to the park. These trails are designed to decrease automobile congestion while facilitating increased connectivity of visitors and residents to the park, continuing Rockefeller’s legacy. 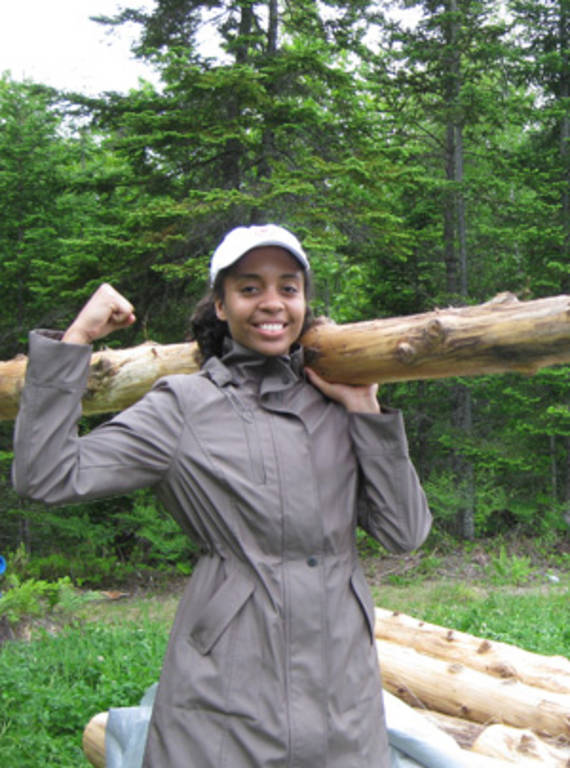 The author helps build one of the Village Connector Trails at Acadia National Park.

Photo courtesy of Friends of Acadia.

On June 2, 2012, National Trails Day, I had the opportunity to represent NPCA at the dedication ceremony of the Duck Brook Connector Trail, the fifth trail in the Village Connector Trail series. This trail begins on Maine’s Route 3 outside the front entrance of the Acadia Inn and (thanks to a generous easement from the inn) provides a direct route to the carriage roads developed by Mr. Rockefeller almost a century earlier. During the trail dedication, I was struck by the number and diversity of people who attended: They were neighbors and tourists, seasoned park-lovers and first-timers, retirees and college students. Despite inclement weather, they were eager to commend the tremendous efforts of NPCA, Friends of Acadia, and NPS and hike the new trail for the first time.

The effort to make Acadia more open and accessible is not over. Nature Valley has continued to provide generous funding toward this project, and NPCA in conjunction with Friends of Acadia is currently completing another trail in Trenton, Maine, just outside the new Acadia Welcome Center. And as I toured my favorite national park this past October, I reflected on other initiatives that the various partners of Acadia, like Nature Valley, have advanced over the years to ensure that more people experience and appreciate this special place. Their work has included diverse projects, from clean, propane buses that tour the park to the Schoodic Education and Resource Center, Acadia’s training and research center dedicated to educating youth in one of Maine’s poorest communities.

Acadia, like other national parks, is a one-of-a-kind, American-made creation that has provided ecological health, recreational opportunities, economic prosperity, and an appreciation for the natural world to millions of people. At NPCA, we will continue to champion Acadia and applaud the efforts of NPS and Friends of Acadia for bringing the park to a larger and more diverse segment of America. I am grateful to Nature Valley and other public and private partners that recognize our national parks are ventures that are just as worthy of investment today as they were almost a century ago.