The Park Service plans to shed light on pre-Colonial Indian society at the site where Pocahontas met John Smith.

In December 1607, six months after the founding of the English settlement of Jamestown, Capt. John Smith was captured by a relative of Powhatan, the leader of a chiefdom based in what is now eastern Virginia. After detours through several Indian settlements, Smith was finally taken to Werowocomoco, the residence of Powhatan himself. Smith’s first impression of the Indian leader was that of an “emperor” displaying a “grave and majestical countenance.” According to Smith’s writings, the two proceeded to exchange information about their respective homelands. 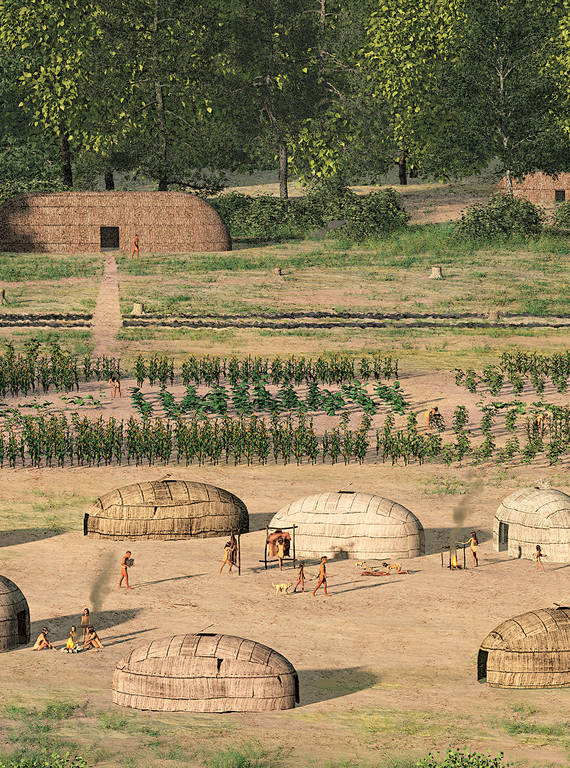 This illustration of Werowocomoco, based on archaeological research, scholarship and conjecture, shows the settlement in the late 1500s. Capt. John Smith met Chief Powhatan and his daughter, Pocahontas, there in 1607

What happened next is still a matter of great debate 400 years later. In an account published almost two decades after the event, Smith recounted how Powhatan’s men brought out two large stones, placed his head on them and prepared to “beat out his brains” with their clubs. At that moment, Pocahontas, “the king’s dearest daughter,” successfully intervened. She “got his head in her arms and laid her own upon his to save him from death.”

Smith returned four more times to Werowocomoco to meet with Powhatan. Then, just over a year after his first encounter with Smith, Powhatan moved inland under pressure from the colonists. The exact location of his former home, one of the most important Indian sites in the region, was eventually forgotten, and it wasn’t until 15 years ago that archaeologists rediscovered Werowocomoco. After nearly a decade of excavations, they found not only evidence of contact between the Powhatan Indians and the English colonists but artifacts suggesting that Werowocomoco, which translates from Virginia Algonquian language to “a place of leadership,” had been a significant spiritual and political place for four centuries before that. The National Park Service acquired the site last June and will soon develop plans to open it to the public.

“It has the potential to share a very powerful story, to help us better understand the Old and New World coming together and provide some of that story through an American Indian lens,” said Chuck Hunt, superintendent of the Captain John Smith Chesapeake National Historic Trail, who will oversee the planning process.

Using maps from the early 17th century, including one drawn by Smith himself, historians hypothesized that Werowocomoco was situated in Purtan Bay, a small cove on the York River just 15 miles from Jamestown. In the early 1970s, Randolph Turner, then a young archaeologist, decided to investigate.

After surveying the area, Turner set his sights on a property overlooking the bay, but each time he stopped by, the owners weren’t home. Finally, in 2001, two of his colleagues met with owners Bob and Lynn Ripley. When the archaeologists saw the extensive collection of stone points and pottery fragments Lynn had gathered on walks by the river, they immediately contacted Turner, by then a regional director for the Virginia Department of Historic Resources. Shortly after, he saw the artifacts himself and knew instantly they dated from the right period. “I realized that it really was Werowocomoco,” he said.

Before excavating the site, archaeologists reached out to local tribes to obtain their consent and solicit their input. During an initial meeting, tears flowed freely, Turner recounted. It was the first time that some had been given the chance to participate in that kind of investigation of their past. Also, this was a place of extraordinary significance for them. When she first walked the grounds of Werowocomoco, Rappahannock Chief Anne Richardson said she had a spiritual experience.

“You can feel the spirit of the land,” she said. “It’s a great place that renews you and makes you feel like you’re not alone in the world.”

Archaeologists started surveying the site in 2002, and digging began the following year. On the river bluff, they found evidence of seasonal settlements dating back more than 2,000 years. Pottery, pieces of corn and a fragment of a single bean, as well as imprints of ancient house posts, revealed the existence of a sizable town established four centuries before Powhatan moved there.

Inland, the excavation team came across artifacts that were very different from those close to the river: tobacco pipe fragments and a high concentration of copper pieces. Tobacco smoking typically took place during diplomatic and ceremonial events, and the chemistry of the copper found at Werowocomoco is similar to that of copper bits found at Jamestown, said Martin Gallivan, a professor at the College of William and Mary who led the excavations. Archaeologists also found the remains of a house they suspected might have been Powhatan’s residence because of its size, structure and location. The area near the river and the ceremonial space inland are separated by two parallel trenches extending for hundreds of feet — the only monumental-scale Indian feature found in the region.

Ashley Atkins, a member of the Pamunkey tribe and a graduate archaeology student at William and Mary who has worked at the site, said Werowocomoco is part of the tribe’s “cultural patrimony,” but it can also serve a political purpose. “It’s a tool for us to show the outside world that we’re still here,” she said. “We never went away, and we have this rich history that we’re still connected to.”

The excavation project ended in 2010, and in 2012 Kathleen Kilpatrick, then director of the Virginia Department of Historic Resources, negotiated a conservation easement with the owners that guaranteed permanent protection for Werowocomoco and later paved the way for the Park Service to acquire the site. Hunt, the superintendent, said the planning process will include extensive collaboration with local tribes.

Archaeologists may continue excavating the site down the road, but they are unlikely to settle the arguments over what really happened between Smith and Pocahontas. Some scholars think Smith misinterpreted what they suspect was an initiation rite. Richardson, the Rappahannock chief, believes Powhatan wasn’t trying to kill Smith but to bring his colony into his chiefdom. Turner noted that Smith conveniently waited until the other protagonists were dead and could no longer contradict him to publish the story of the rescue.

“If you look through his writings, this is not the first time a fair maiden appeared in a time of crisis,” he said. “I personally believe that John Smith made the story up.”

This article appeared in the Spring 2017 issue