Many Native American families in the Southwest are sorely affected by pollution from coal-fired power plants, yet their concerns often go unheard by decision-makers

Shiprock, a majestic rock formation of great religious and cultural importance to the Navajo, could once be seen from Mesa Verde National Park, 162 miles away. But now, thanks to air pollution, Shiprock’s visibility is often limited to just 20 miles. Losing sight of this spiritual symbol is just one unexpected way that coal-fired power plants have affected the Navajo and Hopi communities, on top of the more common health and air quality concerns like asthma and haze that affect people who live with constant airborne pollution.

Two remarkable women inspired the video when they realized that rural Navajo and Hopi families are sorely affected by pollution from coal-fired power plants, yet their concerns are not heard by decision-makers in their tribal capital or our nation’s capital. 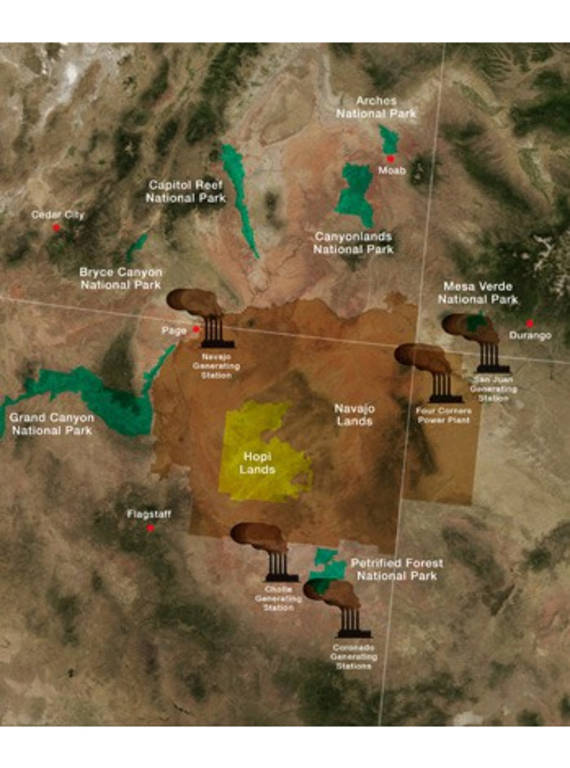 Coal-fired power plants in the Southwest that threaten Navajo and Hopi lands and national parks.

One is Donna House, a member of the Navajo Nation, who joined a group of air activists NPCA organized last year in Washington, DC, to lobby on regional haze rule issues. Involved with a Navajo environmental group, Donna is especially concerned about the impact that coal-fired power plants have on the health of the Navajo people. Donna teamed up with NPCA’s clean air counsel, Stephanie Kodish, to interview and record people across the Navajo Nation and nearby Hopi Reservation who are impacted by pollution. Donna works with the community group Diné CARE whose members conducted the outreach and interviews for the video (Diné is the Navajo word for Navajo, and CARE stands for Citizens Against Ruining our Environment).

The video has been compiled from hundreds of hours of footage from committed Diné videographers and translators. Diné CARE also prepared a version designed with a Navajo audience in mind, to be distributed on the Nation.

Videos and photos are a pale reflection of real-life experience on the Navajo Nation—the vast sky, the improbable rock formations, the endless driving across empty plains to get from here to there. The Nation is about half the size of New York State. Mostly high desert, the summers are hot and dry and the winters snowy and biting cold. The occasional storm or snowmelt makes travel on the many dirt roads problematic. Four beautiful, sacred peaks surround their homeland, as do many wonderful national parks. Four parks—Canyon de Chelly, Navajo Monument, Rainbow Bridge, and Hubble Trading Post—are entirely within the Nation.

The Navajo share a rich and complicated culture. Our work together, much like any cross-cultural effort, has required patience and a willingness to address differences so we can communicate beyond them.

One time, for instance, I met with a number of Navajo in an oversized hogan, a traditional dwelling, for an emotional community meeting.  Residents expressed anger about promises a local energy company had broken, like not getting electricity despite being close to a mine, and no road upkeep despite the needed bulldozers nearby. Some shared grief over relatives who suffered ailments they tie to the mine and power plant. At one point I was completely surprised when a speaker accused those of us visiting of not caring about what they said, because we weren’t recording or writing what the speakers were saying. We mistakenly assumed that writing notes would have been disrespectful!

Another time, Donna, Stephanie, and I were on a conference call to work out the budget for this video project, and Stephanie was curious why there was a line item called traditional food. Donna explained that it is expected when visiting someone, especially in a remote location, to bring along traditional food as a gift of good health and strength. I remembered this later when stopping at the Petrified Forest National Park gift shop before visiting a Navajo friend. I was able to purchase a 20 pound bag of Bluebird Flour, an essential ingredient in Navajo fry bread, and the gold standard of food gifts. My friend’s face lit up when she saw it, and she shared a long tale of the last time she got such a gift during an important ceremonial gathering at her home.

I hope you enjoy the video and share it with friends. We’ll feature it during campaigns to clean up this region’s air, such as early next year when we push for strong controls at the Navajo Generating Station. Fortunately, the Environmental Protection Agency recently announced stricter regulations on three power plants in Arizona.