NPCA's traveling park lover visits a rare marble cave system in the Pacific Northwest, only to be reunited with an amusing character from his past.

Growing up in Oregon, Caveman campers were everywhere. On weekend fishing trips with my family, my sisters and I would laugh at the Fred Flintstone-like logo on the front of each camper. At the time, I had no idea the caveman was from a national park site. I figured this out later in life during my first visit to Oregon Caves National Monument and Preserve. Turns out there is a decades-long connection between the town of Grants Pass, the caveman and the caves.

The monument is located in the Siskiyou Mountains of southern Oregon, about an hour west of Grants Pass. Elijah Davidson discovered the site in 1874 when he followed his dog, who was chasing a bear, into the caves. Within a decade, the first fledgling tour company was giving $1 underground tours, which included a camping spot and pasture to graze your horse. Official recognition by the federal government came in 1909 when President William Taft used the Antiquities Act to create Oregon Caves National Monument. 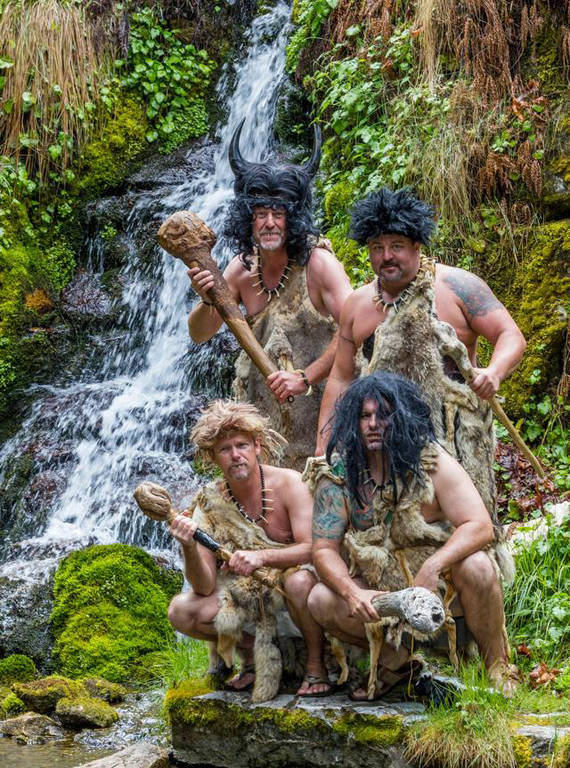 Cavemen near Grants Pass have been promoting their local national monument for decades.

With the advent of the automobile and construction of a road to the caves in the mid-1920s, business owners in Grants Pass began to realize the value of a booming tourism industry. A group of locals calling themselves the Oregon Cavemen began dressing in animal skins and horsehair wigs and staging themselves along the underground tour at Oregon Caves, posing for photos in promotional brochures, taking part in parades and public events, and hosting annual events to draw people to the area. It is easy to see why campers manufactured in Grants Pass were branded with the caveman logo that tickled my sisters to no end every time they saw one. Members of the Grants Pass Active Club continue to dress as cavemen to help spread the word about Oregon Caves, calling themselves “the world’s most unique booster group.”

I was reminded of this family caveman connection when I visited Oregon Caves several months ago with my girlfriend Craig. We stayed in the beautiful six-story Oregon Caves Chateau, which was completed in 1934. The lodge was constructed in a rustic style with cedar bark siding so it blends well with the forested landscape, though the electrical and plumbing systems are original and could use some restoration. Fortunately, a local group calling themselves Friends of the Oregon Caves and Chateau is busy raising money to supplement Park Service funds to bring the Chateau into the 21st century. Still, it is a totally charming place to stay from May through November, with dark wood paneling, high ceilings with big wooden beams, a creek that runs through the dining room, an old fashioned diner on the downstairs floor that serves breakfast and lunch, and a large lobby area filled with original Monterey furniture still in use 80 years later. We took advantage of the opportunity to donate to the friends group when we checked in.

With our bags stashed in our room, Craig and I headed out to explore the park. These marble caves began as limestone that cooked at very high temperatures several miles below the earth’s surface millions of years ago. As the land slowly rose up, surface water mixed with carbon dioxide leached from the forest soils, slowly eroding the marble and creating the passageways we are now able to explore. These are not pristine caves – people have been exploring them for over 100 years. Prior to federal management, visitors broke off and removed some of the stalactites and other features. Some passageways were expanded to allow easier foot traffic, and a connection was blasted between two of the caverns to make for a longer tour. But none of it takes away from how cool it is to be underground in some of America’s few marble caves.

All cave tours are guided by park rangers, and a reservation is recommended. The Discovery Cave Tour is the standard 90-minute guided journey. It is over half a mile, electrically lit, and includes 500 stairs and low rock ceilings. For the more adventuresome, there is an Off-Trail Adventure Tour that comes with hard hats, knee pads and leather gloves. We opted for the Candlelight Tour, 60 minutes underground with only candles — and what a treat it was! The tour is limited to just 15 people, and walking through the caverns with only flickering light reflecting off the marble walls let us experience what it must have been like for the visitors over 100 years ago. The marble is very light in color, so there was plenty of reflected candlelight showing off the stalactites, columns, flowstone and other features inside the caves. And when we all blew out our candles to spend several moments experiencing the true darkness underground, we were very thankful the ranger hadn’t forgotten his lighter!

The tours underground aren’t the only attractions at Oregon Caves. Thanks in part to work by NPCA, over 4,000 acres of old-growth forestland along Cave Creek was transferred from the Forest Service to the Park Service as a national preserve in 2014, and the underground Styx River, which flows into Cave Creek, is now designated as a Wild & Scenic River. The Civilian Conservation Corps was busy here during the 1930s constructing trails through the forest, including a trail to one of the world’s largest Douglas fir trees. And the new national preserve lands include a campground.

So whether you choose to camp or experience one of the West’s great national park lodges, or opt for a candlelight tour or travel underground on your hands and knees, Oregon Caves has something for everyone — regardless of whether you’ve seen those old Caveman campers or know their curious history.