Fungus and beetles threaten to topple the remarkable whitebark pine. Can tree enthusiasts help the keystone species before it’s too late?

Mountaintop living isn’t easy. At very high elevations, the wind can be fierce, the temperatures bitter, the snow heavy, and the soil thin and crumbly. Most trees simply can’t survive, but the whitebark pine is a notable exception: Somehow, these trees manage to live — and even thrive — in the highest, sketchiest locations. Some have lived at the edge of the treeline for more than 1,000 years.

In Grand Teton National Park, people come across the trees on classic hikes to places such as Lake Solitude and Surprise Lake; at Crater Lake National Park, their twisted trunks and windswept branches appear throughout Rim Village and in the midst of the lake’s blue depths on Wizard Island.

Wherever they are, people notice them. “The architecture of the tree is very dramatic,” said Nancy Bockino, an ecologist at Grand Teton. They look like charismatic bundles of broccoli, she said, particularly when they’re sculpted by wind and weather on exposed slopes.

But people have also been noticing how many of the whitebarks are dead. Despite their hardiness, the trees have not been able to fight off threats that have emerged in the last few decades. In Montana, Wyoming and Idaho alone, more than 2.7 million acres of whitebark pine — about 11 million pines in all — have been killed by the mountain pine beetle, a native insect that became much more prevalent in Western forests in the late 1990s. The beetles burrow into the bark to lay eggs, and the growing larvae then feed on the trees. These larvae also deposit a fungus that can block the tree’s circulatory system. The other scourge has been white pine blister rust, a fungus from Asia that was introduced to North America in the early 20th century. Blister rust can wipe out entire trees or kill off the whitebark’s high cone-bearing branches, ending its ability to reproduce.

Worried about the damage, scientists began a wide-ranging effort to save the trees around 18 years ago. To learn more about how the species is responding to threats, some researchers have sought out the healthiest remaining whitebark pines and collected their seed-rich cones. They then ship the cones to nurseries, where scientists grow, screen and test seedlings for resistance to blister rust. The healthiest seedlings become part of a replanting program in national forests and other public lands in the West, including Glacier National Park. Those involved say it’s critical work because this striking symbol of the western high country provides foods and shelter for a number of species and plays a critical role in protecting high-elevation watersheds. And the need to turn things around is growing even more pressing as climate change exacerbates the problem and the trees keep dying: “We’ve lost a quarter of the whitebark that we had when we started this program, primarily to mountain pine beetle and wildland fire,” said Mary Frances Mahalovich, a geneticist who began screening whitebark seedlings in 1999 at a U.S. Forest Service nursery in Coeur d’Alene, Idaho.

For Bockino, the race to save the whitebark has meant spending the past 15 summers scaling trees. In Grand Teton, Yellowstone and nearby national forests, she and a partner use climbing gear to ascend high into the trees they’re studying. “It’s very much like rock climbing, except there’s tree sap on everything,” Bockino said. Sixty feet up, at the tip of the tree, Bockino secures herself and then uses both hands to work, balancing on tiny branches as the trees sway in the wind. It can be hard work, and scary, Bockino said, but the top of a whitebark pine is “a pretty special place to spend time.”

Mahalovich gives her a list of thriving whitebark called “plus trees” to study. In early summer, Bockino and her colleague put wire cages over developing cones to protect them from creatures in search of food; in the fall, they return to harvest the cones. Where needed, they attach pouches of verbenone, a pheromone that tells approaching pine beetles that the tree is already infested. They also collect scion — young shoots — and pollen and report on each tree’s growth and health, returning to the same trees year after year. 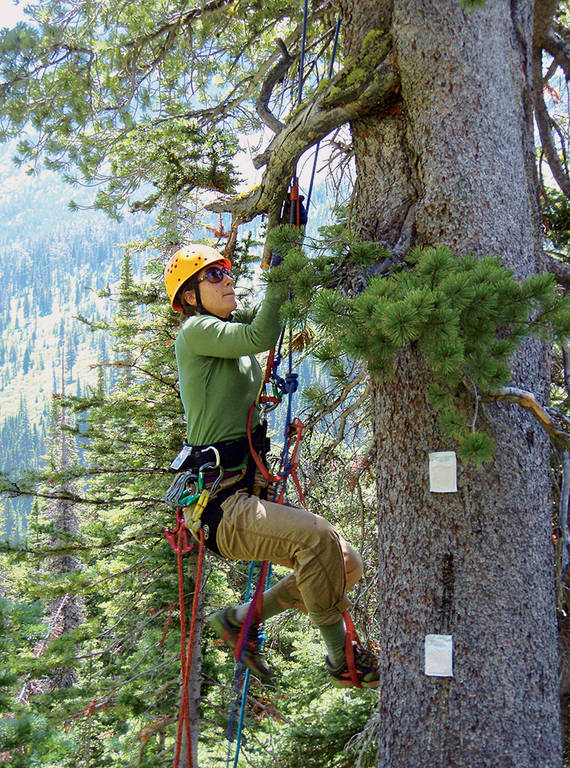 Climbing a whitebark pine in Glacier National Park, where park workers have planted more than 21,000 trees since 2000.

Healthy whitebark pines are essential to the forest’s health and to one species in particular: The Clark’s nutcracker and the tree have evolved to work together over millions of years. The high-fat whitebark seed provides enough energy for the bird to live at high elevations. The nutcracker, in turn, is responsible for distributing seeds. The nutcracker’s role is particularly important because the whitebark pine cones don’t open on their own. The bird breaks open the cones and stores as many as 100 seeds at a time in a tiny pouch under its tongue. It hides these seeds — as many as 100,000 per bird each year — in small caches around the forest that it returns to throughout the winter. The seeds that aren’t eaten may become new seedlings.

Once the cones have been cracked, many other species swoop in to join the feast. The seeds are so important for so many critters — as many as 110 bird and animal species feed on them, including grizzly bears — that the tree is considered a keystone species that holds together the high-elevation food chain and contributes to the region’s biodiversity. Along with providing a high-calorie meal, the trees offer shelter to deer, grouse and other wildlife.

The whitebark is also called a foundation species, because it’s critical to the surrounding physical environment. When a whitebark grows at a high elevation, its presence protects other plants by blocking the wind and holding a small patch of moist soil at its roots. It also can form a fence of sorts, gathering and keeping snow in place. As spring approaches, it shades the snow, which then melts more slowly, lessening the potential for spring floods and making more water available during the drier summer. “With changing snowpacks and water resources, it’s an important thing because we need to keep snowpack in the high country for longer,” said Rebecca Lawrence, who manages the native plant restoration program at Glacier.

In the late 1990s, researchers studied thousands of Glacier’s whitebark pines and found that 44 percent were dead and more than 75 percent of living trees had been infected with blister rust. The devastating tree loss led to an extensive restoration project. “Our local population seemed so vulnerable — we couldn’t just stand and do nothing and watch our trees die,” said Tara Carolin, who directs the park’s research learning center. Since 2000, park workers have planted more than 21,000 trees. This year, they’ll plant as many as 2,000 new seedlings and monitor the previously planted ones, many of which are now chest-high.

Staff at other parks are weighing replanting efforts like the one at Glacier. In Mount Rainier and North Cascades National Parks, the results from more than a decade of long-term whitebark monitoring will be compiled next year, but the overall picture is already clear: “It’s not getting better,” said Regina Rochefort, a plant ecologist and science adviser for the North Coast and Cascades Network, which includes North Cascades, Mount Rainier and Olympic National Parks. If most of the large, cone-bearing trees are dying, she said, “then we really will have to consider replanting.”

The outlook might seem grim, but Bockino keeps returning to the tree’s resilience even in the harshest conditions. Many of the trees she’s studied have fought off blister rust, and that makes her think all those seedlings and trees-to-be have a shot at survival. “There’s definitely a lot of mortality in the big trees,” she said, “but I believe there’s hope.”