Once dubbed the most dangerous park in the country, these wild Arizona lands are fully reopened, noticeably restored and full of botanic wonders.

Rain is a great transformer, and in the desert just a little bit of water can cause an explosion of color. Last year, I was fortunate to visit Organ Pipe Cactus National Monument at the end of the soft winter rains and was treated to blooming cacti, wildflowers and a desert teeming with birds.

Established by President Franklin Delano Roosevelt in 1937 through the Antiquities Act, Organ Pipe is not on the way to anywhere. You have to want to go there, and for stamp #158 in my national park passport, I was more than happy to make the trip. My girlfriend Craig flew in from D.C., and we met at the Tucson airport where our friends Pat and Jennifer picked us up in a bright white Hyundai SUV and off we went. By the end of the trip, the Hyundai would be a much dustier and duller white!

Although 95 percent of this desert park is designated wilderness, Organ Pipe’s 31-mile border with Mexico and its long history of smuggling and fatalities of people attempting to cross the border have certainly impacted the park. In 2002, drug traffickers killed national park law enforcement ranger Kris Eggle, and in 2003, the National Park Rangers Lodge of the Fraternal Order of Police named the park the most dangerous in the nation. This resulted in 70 percent of the park being closed for more than a decade until September 2014, when it fully reopened to the public. Now, dramatically increased security has made the park safe for visitors, though park signs still warn that people continue to make the dangerous trek to cross the border illegally through this rugged terrain. 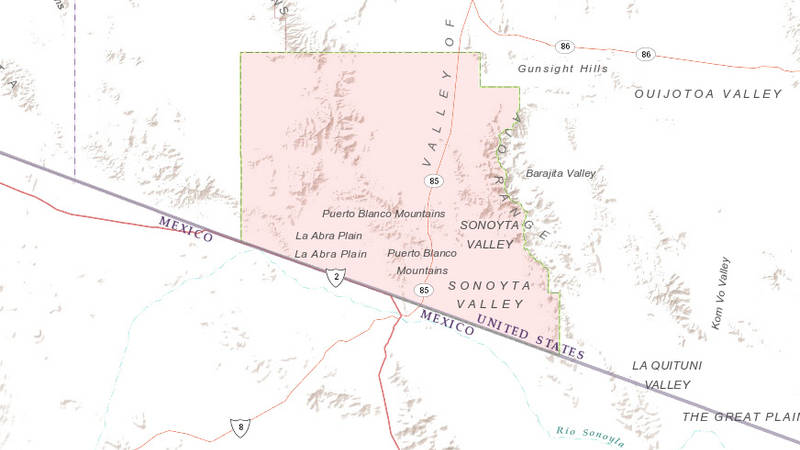 See a map of Organ Pipe.

Before we made it into the park, we decided to explore the mining town of Ajo, a 130-mile drive from Tucson and the closest town to Organ Pipe with decent lodging and cold beer. The copper mine at Ajo closed in 1985, so the town is evolving into what comes after mining goes away. Fortunately, Ajo was well-designed by its founder, John Campbell Greenway, one of Teddy Roosevelt’s Rough Riders. The town center has Spanish Colonial Revival-style buildings surrounding a green town plaza park that is currently being restored and revitalized for tourists and retirees. It is an easy town to walk in.

We stayed at The Guest House Inn, which was built for VIPs visiting the mine. The Guest House is quiet and comfortable, and the innkeeper, Mike, serves great breakfasts. After a good night’s rest and a visit to the local grocer for lunch, we headed to the park, which always includes a stop at the visitor center to get oriented (and get our stamp!).

Organ Pipe is in the Sonoran Desert and has two seasons of rain each year – a soft winter rain, which we experienced, and much heavier rainfall in July and August. The result of this regular rainfall is more plants than any other desert in the world. We wanted to explore different areas of the park to see different plant species, so we started with a couple of hikes off the 21-mile Ajo Mountain Loop. 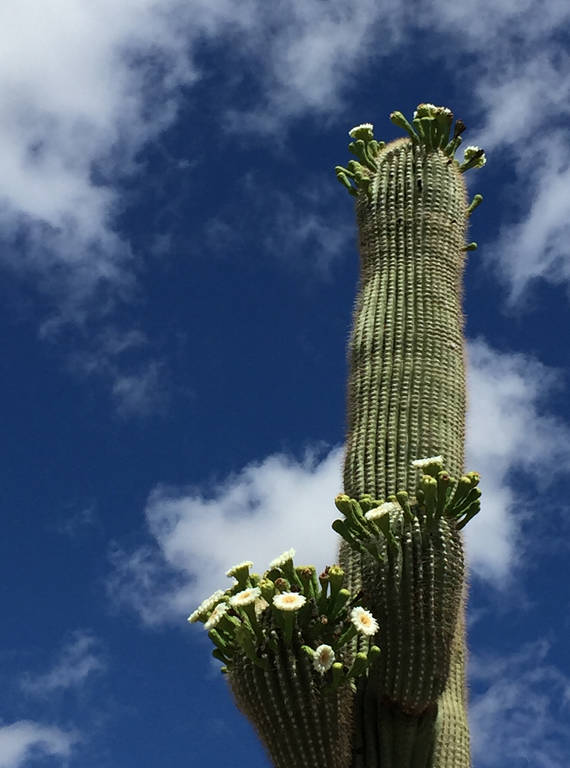 A saguaro in bloom at Organ Pipe Cactus National Monument.

Our first stop was the Arch Canyon Trail for a hike into a narrow canyon with juniper and scrub oak trees. Turns out the Ajo Mountains get more rain than anywhere else in the park, and the lush, green vegetation along the streambed showed it. The short out-and-back hike served as a warm-up for our next walk, the 3.2-mile Estes Canyon Loop. This second hike took us up a small wash that was filled with blooming saguaro, prickly pear and buckhorn cholla and onto a ridge of volcanic rock that gave us views south into Mexico and north into the mountains and ridges of the Ajo Range. The saguaro blooms are bright white and pollinated by uniquely evolved bats and white-winged doves. We saw plenty of these doves and a couple of gilded flickers nesting in a large saguaro. The cholla blooms run the gamut from predominately purple to red and yellow, and they covered the wash. We played hide-and-seek with an ash-throated flycatcher under a cloudy sky, and intermittent drizzles kept us cool as we walked and birded our way up the wash and over the granite and basalt ridges. It was truly a perfect day for a hike.

The other driving loop option at Organ Pipe is the 41-mile Puerto Blanco Drive. In late afternoon, we headed to the southern part of that loop, seeking the senita cactus, common in Mexico, but only found in the U.S. in the very southern part of Organ Pipe. The South Puerto Blanco Drive parallels the border before a short road turns right into Senita Basin, where we did find a senita cactus in the wild. Photos were taken!

#{image.caption}
The author (right) and his girlfriend Craig pose with a senita cactus. These cacti are common in Mexico, but in the United States, they only grow in the southern regions of Organ Pipe Cactus National Monument.   Photo © Jim Stratton.

We were surprised that we saw no Border Patrol on our drive, as the South Puerto Blanco drive is literally a stone’s throw from the unfenced Mexican border, defined on the other side by a truck-filled highway. As we drove to Senita Basin, it was clear why this area was closed until recently. We saw evidence of the more than 150 miles of illegal roads used to smuggle people and drugs across the border. There are still signs on every road and at every trailhead warning visitors that active smuggling still occurs. But we also saw the work underway by the National Park Service to repair the road damage and restore the park. We felt perfectly safe.

Back in Ajo, it was burgers and beer time at the only place in town for burgers and beer – 100 Estrella. We reviewed our bird lists and decided that a golden eagle and our nesting gilded flickers were the birds of the day. And we toasted how blessed we were to be able to hike and enjoy such a beautiful and green desert that was once largely closed off to the public.