By Kate Siber
Summer 2016: What Lies Beneath

Want to find hidden treasures in the ocean or scuba dive through a shipwreck? The Submerged Resources Center is here to help.

Last spring, a team of National Park Service divers puttered about the shallow aquamarine waters of Buck Island Reef National Monument, in the U.S. Virgin Islands, in an aluminum boat. They cut the engine, dropped a buoy and a line, and, with scuba gear, hopped in and descended. Swimming in neat circles on the sea floor, they weren’t looking for technicolor fish, sea turtles or eagle rays. They were looking for hidden archaeological treasures.

Earlier that week, the team, from the Submerged Resources Center, had surveyed the area using a magnetometer, a torpedo-like instrument that drags behind a boat and detects iron on the sea floor. Now, over dozens of dives, team members were investigating coordinates where the magnetometer had sensed metal. In some places they found discarded fish traps and other trash; elsewhere their high-tech gadgets led them to a sandy sea floor studded with soft corals. But they also discovered anchors, anchor chain and even the skeletal remains of a shipwreck that date to at least the 19th century — and possibly much earlier than that.

“These are resources the park never really knew were there,” said Bert Ho, supervisory archaeologist for the Submerged Resources Center. “Each time you jump in, there’s an opportunity to find something really amazing.”

When most people think of national parks, places like Yosemite and Yellowstone come to mind, but the Park Service also manages more than 5 million acres of underwater lands. More than half of the park system’s 411 sites have underwater resources, including coral reefs in Biscayne National Park, shipwrecks in Dry Tortugas, crashed airplanes in Lake Mead and a water-filled cavern in Death Valley National Park that harbors some of the world’s rarest fish. In Yellowstone, spectacular geothermal vents spew streams of bubbles underwater, and in Montezuma Castle National Monument, in Arizona, layers of sand bubble and swirl in a spring-fed desert sinkhole. Few visitors know about these underwater worlds, but the Submerged Resources Center, a special unit of the Park Service, is on a mission to change that. And with the help of new 3-D modeling tools, custom software and other technology, they are able to explore and map these frontiers more effectively than ever.

Sum 16 What Lies Beneath - Slideshow 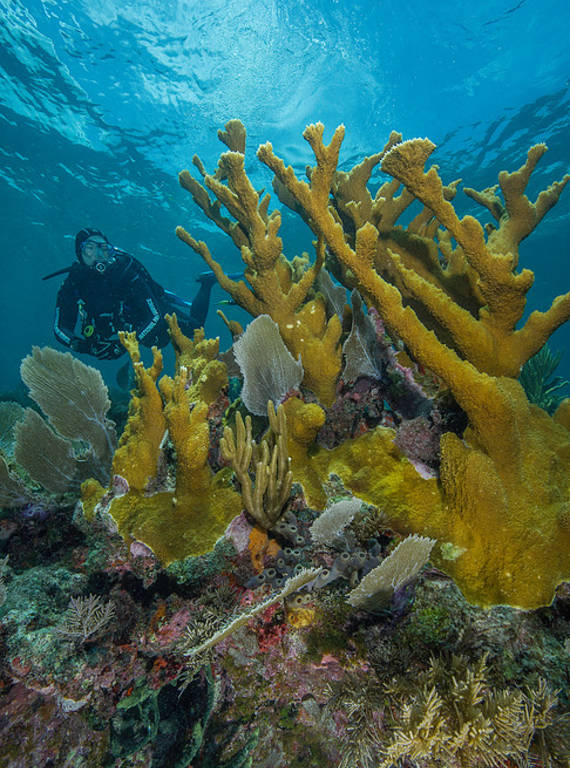 “People have heard of the national parks, but they have no idea that there’s this whole other world to the Park Service underwater,” said Brett Seymour, an underwater photographer and deputy chief of the center. “We’re constantly fighting for the same level of protection and education and outreach for underwater sites that land sites get.”

Often, parks call in the group to help solve an underwater problem, such as mapping areas that are relatively unexplored, figuring out how to protect a disintegrating shipwreck or helping biologists perform studies of invasive species. In other cases, parks ask the divers to develop films, photographs and other media to help visitors appreciate the wonders of underwater public lands that are difficult for the average person to access.

The Submerged Resources Center is in such high demand that the Denver-based team of nine underwater archaeologists and photographers travels around the country for up to seven months each year. They often arrive in a Suburban towing a cargo trailer full of gear and a Dodge pickup hauling a 27-foot Boston Whaler.

“It’s tremendously satisfying to talk to superintendents and other people who have very difficult issues that require the kind of specialized skills that we’ve worked very hard to develop,” said Dave Conlin, chief of the Submerged Resources Center. “I’m fully convinced I have the best job in the National Park Service.”

The idea for the Submerged Resources Center emerged in the late 1970s when the Park Service assembled a team of underwater archaeologists and anthropologists to study what happens to ruins flooded by big government projects, such as the Hoover Dam. After the study was complete, the Park Service realized it had a dream team of highly trained divers and scientists who could potentially answer other important questions in the parks, and the Submerged Resources Center was born.

Sum 16 What Lies Beneath - Slideshow 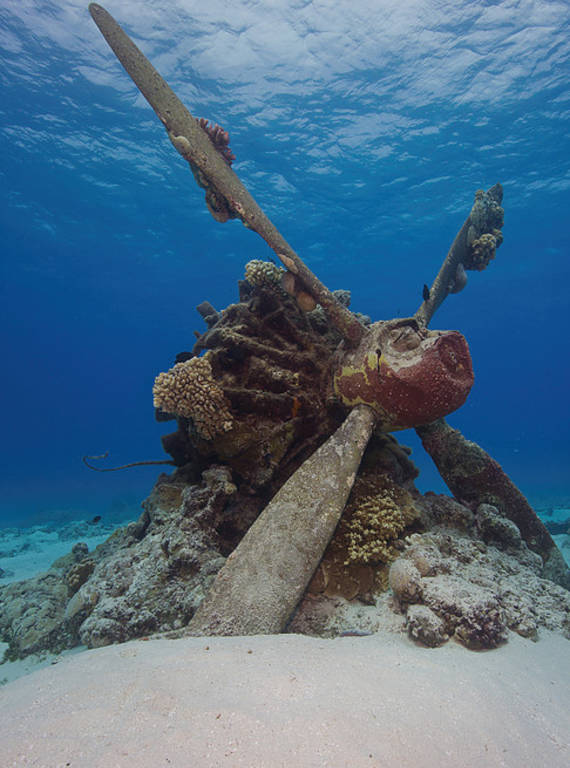 The lone engine of a Japanese Kawanishi H8K “Emily” flying boat stands upright in the shallow waters of Tanapag Lagoon.

Back then, the divers used cutting-edge scuba equipment and some of the first underwater color video cameras. Their tasks included exploring and mapping underwater lands in parks and taking detailed inventories of underwater resources they already knew existed, such as shipwrecks in Isle Royale National Park. Over the years, the cutting edge has evolved dramatically.

“To the 1980s Submerged Resources Center, we’d look like wizards,” Conlin said. One example is the work the divers have done on the USS Arizona, a battleship that sank in the Pearl Harbor attack of December 1941. Now it is protected within the World War II Valor in the Pacific National Monument, where visitors can pay their respects at a memorial to the 1,177 sailors and Marines who lost their lives there. Because only a few parts of the wreck poke out of the bay, however, it’s challenging for park staff to make the underwater story come alive for visitors.

Over the last few years, the center’s divers have worked with partners to use laser-scanning technologies and custom-made underwater 3-D cameras. They have created 3-D video and 3-D digital models, including one of the USS Arizona that is on display in the visitor center.

“The Pearl Harbor story is big, and it’s hard to teach people about it,” said Scott Pawlowski, chief of cultural and natural resources at World War II Valor in the Pacific. These new forms of media “help people to understand why this story is amazing and why it’s such an important part of American history — and world history as well.”

The team has also helped park staff run LiveDives, during which they stream live video footage of divers exploring the wreck and answer questions in real time from people who have tuned in. As if they were diving themselves, viewers can peer into officers’ quarters where a desk and telephone still sit exactly where they sank, marvel at the blast holes on the deck and see artifacts from the servicemen on the ship.

“When you come across these personal effects, like boots or a shaving kit or a hair tonic bottle, you can’t help but think this belonged to a sailor or Marine on the ship — it really has an impact on you,” Seymour said. “You have no idea if they survived the attack, but the connection to a person puts you closer to the fact that there was a massive loss of life on the vessel.”

This year, the Submerged Resources Center is taking its work a step further by collaborating with the Advance Imaging and Visualization Laboratory at Woods Hole Oceanographic Institution to develop a remotely operated vehicle, which will be able to go deeper into the ship than ever before. The team plans to determine the condition of the bunkers, which still hold half a million gallons of fuel, and develop a documentary with PBS.

Other underwater needs will call the Submerged Resources team to different parts of the country. In Yellowstone National Park, the group will look for breeding sites of invasive lake trout, which biologists want to remove because they prey on native cutthroat, an officially “sensitive” species. In California, in partnership with the Interior Department’s Bureau of Ocean Energy Management, the team will troll along the coast, using sonar and magnetometry to identify archaeological sites along ancient shorelines that could hold clues to the settling of the continent. In Dry Tortugas, it will lead a program to introduce youth from a mental health treatment facility to underwater photography; in Biscayne, it will run an underwater archaeology workshop for African-American and Latino students. The divers will also return to Buck Island in the U.S. Virgin Islands to look for sunken slave ships that exist on old records but have never been located.

Sometimes the team opens visitors’ eyes to the underwater realms of the park system one interaction at a time, when curious onlookers spot the divers in their Park Service-emblazoned wetsuit uniforms preparing to enter a body of water where they might not be expected, such as Lake Yellowstone or Death Valley’s Devils Hole, a desert cavern filled with ultra-clear spring water.

“It’s always fun for us to just sort of tickle their fancy and challenge their assumptions,” said Conlin, who delights in telling gobsmacked visitors that the vast majority of underwater sites in the park system, from World War II tanks in American Samoa to the kelp beds of the Channel Islands, are open to the public.

“Hopefully, for some of them, it’ll entice them enough to put on a pair of fins and a mask and snorkel and get in the water and splash around,” he said. “It’s experiencing a whole other side of parks that most visitors don’t even think about.”

This article appeared in the Summer 2016 issue

Speaking Up, Fighting Back