Hamilton: More Than a Musical!

#{image.caption}
The only home Alexander Hamilton ever owned is part of the Harlem neighborhood of New York City.   Photo © Jim Stratton.

This story is part of a series by traveling park lover Jim Stratton exploring some of America’s most fascinating and least known places.

He’s the star of Broadway’s hottest production, “Hamilton,” which swept the Tonys last weekend with 11 awards, including Best Musical — but the Park Service has been interpreting the fascinating life of Alexander Hamilton, one of our better-known Founding Fathers, for decades. I recently got to explore two parks that delve into the character of this remarkable leader and experienced firsthand why his story is irresistible to so many people.

At the ripe young age of 34, Hamilton was appointed Treasury secretary by President George Washington and came up with our U.S. monetary system. This is why his face is still the centerpiece of the $10 bill. Current Treasury Secretary Jack Lew had recently considered redesigning it, but the idea of removing Hamilton from the money he helped establish was unthinkable to an uprising of outspoken critics, including fans of the musical. But Hamilton did more than overhaul our nation’s finances and write a bunch of The Federalist Papers. He also fought in the American Revolution at Yorktown where the Park Service tells his battlefield story along with other accomplishments. It’s there in Virginia, near one of the country’s oldest English settlements, that I started learning about one of America’s newest pop culture icons. 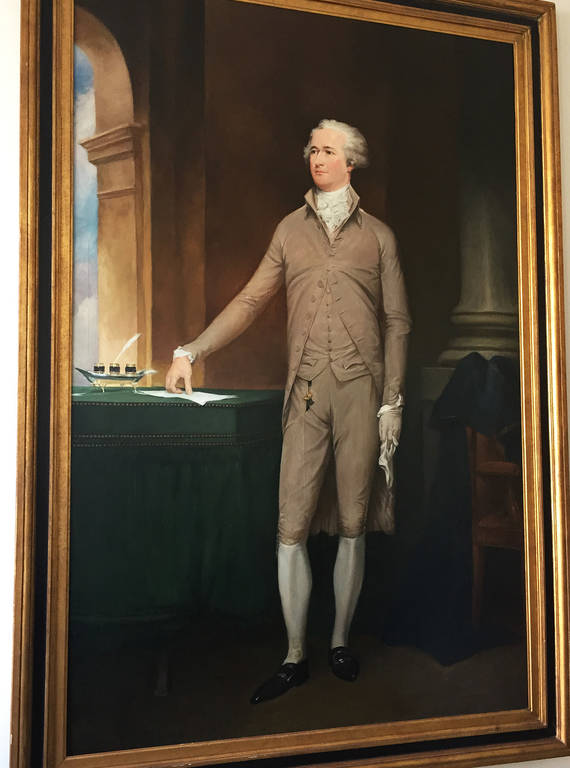 A copy of a full-length portrait of Alexander Hamilton at Hamilton Grange painted by Adrian Lamb.

I was on the East Coast this spring with my girlfriend Craig, visiting her friends and family. Since any trip I do includes adjacent parks, Yorktown was a logical place to visit as we headed south from Washington, D.C. Yorktown is one of several units of Colonial National Historical Park, which also includes Jamestown and Cape Henry, and you can get a passport stamp at all three places! The town is small, right on the York River and full of historic houses — like the bed and breakfast we stayed in, owned by relatives of the musician Bruce Hornsby, who grew up nearby in Williamsburg. The town is also very walkable.

In 1781, the British chose Yorktown as the location for a naval base on the lower Chesapeake Bay. British General Lord Charles Cornwallis believed that if he could subdue Virginia, the colonies would fall back in line under the thumb of the English. So the stage was set for battles on both land and sea at what would ultimately be the last major conflict of the revolution and an American victory.

We got to town late in the day, but in time for a sundowner walk along the shoreline. As we read the Park Service interpretive signs, we learned that Yorktown was the only place where Hamilton actually led an infantry charge during the war.

Hamilton started the war as a captain in the New York Artillery and fought in the battles of Princeton and Trenton. General Washington noted his leadership in battle and asked him to become his primary secretary and aide-de-camp. Hamilton agreed, but his new duties took him out of the front lines of the war where a young man could gain battle glory. He excelled as a combat commander, and after serving Washington behind the scenes, he wanted to get back into the fight. So Washington appointed him commander of an infantry battalion under General Lafayette at Yorktown.

#{image.caption}
An artist’s rendering of Alexander Hamilton’s charge on Redoubt 10 at Yorktown, a heroic attack that captured a British fortification and allowed the Americans to win the battle.   U. S. Army Center of Mlitary History

We stood where Hamilton charged with his men and took one of the British artillery fortifications known as redoubts, sealing the victory for the Americans. The battlefield is well preserved, and the American siege trenches and several of the British redoubts are still there for you to see and touch. The Park Service has a very well-interpreted battlefield auto tour with opportunities to get out of your car and stand where Hamilton and other Americans stood. Unlike many of the Civil War parks we’ve been to, this battlefield was small enough that it was easy to see how the military actions all fit together.

The following week, our friends and family tour took us to New York City, where the only home that Hamilton owned is open to the public as the Hamilton Grange National Memorial. By the time Hamilton built his summer place on 32 acres in Harlem in 1802, he had already secured his role in history. He had worked his magic through the Federalist Papers and helped establish a strong central government during the Constitutional Convention of 1787. As Treasury secretary, he led the development of our national currency out of confusion and chaos, and worked to stabilize the country’s fiscal troubles during a time of high inflation and unrest. After he finished with his government service, he developed a successful law practice.

Hamilton named his home “The Grange” after his father’s ancestral home in Scotland. He only lived there for two years before his unfortunate death in a famous duel with Aaron Burr in 1804. In Hamilton’s day, Harlem was where residents of lower Manhattan would go in the summer to escape the heat and humidity. The property was only a 90-minute carriage ride from his law offices on Wall Street. Today it takes about 30 minutes on the A train (about the same time it takes to get from Hamilton Grange to Times Square to see the musical version of his life unfold on stage).

In addition to the fascinating stories of Hamilton and his contributions to our country, the Park Service also tells the story of the Grange and its two dramatic moves. In 1889, the home was in foreclosure, and a local church, St. Luke’s Episcopal Church, physically relocated the building about two and a half blocks away, where it was adjacent to the church and used for religious services. In 1924, the American Scenic and Historic Preservation Society acquired the home and opened it to the public as a museum. The Park Service acquired it in 1962 and moved it again to its current location in 2008 to allow visitors to experience the home in a state closer to its original condition. Fortunately, it only moved a few blocks, so it still sits on the site of his original acreage. The video at the memorial of the three-story mansion moving down the streets of Harlem is not to be missed!

Tours of the home are available to a limited number of park visitors on a first-come, first-served basis. Some tours are guided. We did the self-guided tour, but a park ranger telling stories would have made it even more interesting.

The musical “Hamilton” has focused attention on this Founding Father, and the words and music tell both Hamilton’s and our country’s founding story. The National Park Service provides you with the actual places where Hamilton fought during the revolution and lived afterward. While I love words and music, there’s nothing like touching history.

See more in this blog series by traveling park lover Jim Stratton on exploring some of America’s most fascinating and least known places.