As we gear up for the summer blockbuster season, some movie lovers might be surprised to learn that a reproduction of the world’s first film studio is part of the U.S. National Park System.

#{image.caption}
A reconstruction of the Black Maria, the first film production studio in the world.   Library of Congress photo.

A: Hollywood, California, may be a mecca for American moviemaking, but the technology for film production began on the East Coast — in West Orange, New Jersey, at what is now the Thomas Edison National Historical Park. 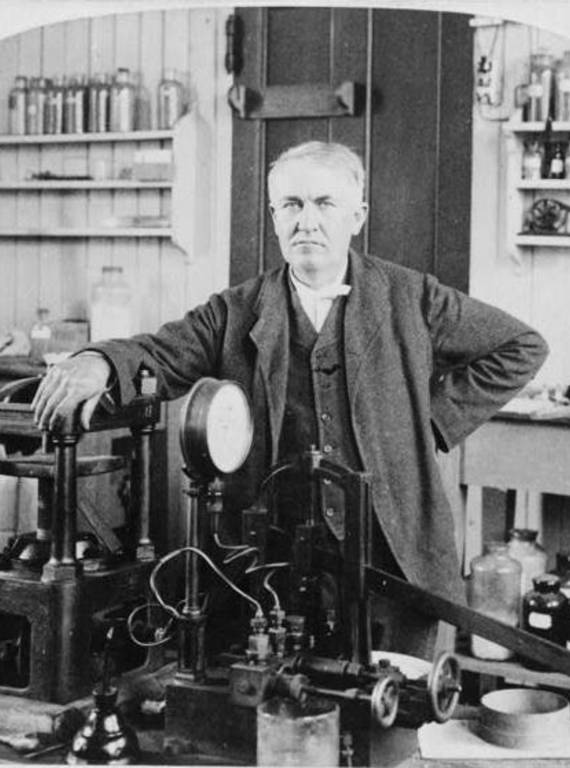 A 1901 photo of Thomas Edison in his laboratory in West Orange, New Jersey, which would later become the Thomas Edison National Historical Park.

Thomas Edison may be best-known for inventing the light bulb, but with more than a thousand U.S. patents in his name, his reach as an innovator touches numerous aspects of modern society. From the telegraph to the phonograph to the tiny working parts of various machines and gadgets, he influenced and improved how people would communicate and experience the world for years to come.

In 1891, Edison worked with his employee, William K.L. Dickson, to develop the Kinetograph, the first motion picture camera, which used a series of small photos on a cylinder to produce a moving image. Edison also developed the Kinetoscope, a peep-hole device people could use in penny arcades to view these first films. Early customers would pay five cents to see 20 to 30 seconds of silent film, one at a time, through these special viewers. (It wasn’t until several years later, in 1895, that French inventors Auguste and Louis Lumière would patent the first movie-projection devices, leading to the first screenings where seated audiences could watch films simultaneously.)

In 1893, Edison’s workers built the world’s first film production studio, the Black Maria, on the grounds of Edison’s laboratories to make movies with the Kinetoscope. The technology required bright light, so the studio was built on a rotating platform with a window in the ceiling to capture as much sunlight as possible throughout the day. Small and covered in black tarpaper, the studio got its name from the cramped police vans, or “paddywagons,” which were commonly called black Marias at the time. Crews made hundreds of short films in this simple wooden building before Edison built a better-quality studio in New York City and tore the Black Maria down in 1903.

The earliest films created at the Black Maria were short representations of everyday life — nothing like the plot-driven works of modern-day cinema. Clips of boxing matches, barbers, trapeze artists and blacksmiths were enough to create a sensation among the public and drive early interest in the world of moving pictures. Edison’s studio created the first film to ever receive a copyright in 1894. The work was five seconds long. The storyline? A man sneezing.

“Edison Kinetoscopic Record of a Sneeze” (also known as “Fred Ott’s Sneeze”), filmed in 1894 at the Black Maria studio, was the first motion picture to be copyrighted in the United States.

The National Park Service maintains a 1954 reproduction of the original Black Maria where visitors can imagine what it was like to step on the first film stage, before the world had any inkling of what it would someday mean to be a movie star.