Pauline Matt dreamed that the water was dying and that she had the power to stop it. Her dream was not far from the truth, with fracking arriving on the Blackfeet Indian Nation and adjacent to Glacier National Park in Montana. Instead of allowing the dream to paralyze her, she kept herself moving—literally—by organizing the six-day, 80-mile Chief Mountain Water Walk to help focus the eyes of the nation on this corner of Montana.

Eighty miles doesn’t necessarily sound like a particularly long distance; on I-90 in Montana, it would take only about an hour to drive. But when you’re on foot—and you factor in vehicles flying by at 70 m.p.h., August temperatures pushing three digits, baking pavement, and the fact that Pauline has long qualified for AARP membership—80 miles begins to feel like a very long way indeed. 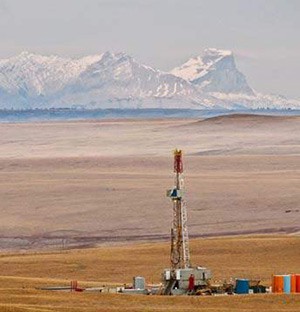 Pauline knew all of these things before she laced her walking shoes. She also knew how walking that far will make your feet hurt and your calves burn, give you blisters the size of golf balls, and, ultimately, connect you to the landscape in a way you never realized was possible. Perhaps most importantly, Pauline knew that walking from Chief Mountain to Heart Butte, two sacred sites of her Blackfeet Indian Nation, would forever change the way she and her fellow walkers look at the earth. Hers was a journey to connect to a sacred landscape, and to reconnect an entire culture, one deliberate step at a time.

Carrying a rawhide bag of water from a spring at Heart Butte, Pauline and her fellow walkers greeted each morning by burning sweetgrass and offering prayers to the dawn. The days felt much the same—an unremitting rhythm of feet on sun-scorched pavement that unfolded at a ceaseless 3 m.p.h. Osprey, bears, bald eagles, moose, elk, and other creatures appeared along the way, and the ever-shifting views were always awe-inspiring.

Such is this place where mountains and prairies collide, whose snow-capped peaks are the water tower for our nation, where Glacier National Park and the Blackfeet Indian Reservation share a sublime border marked for millennia by water, mountains, and life. All of that, however, is changing at a speed that far exceeds the measured pace of Pauline’s “water walkers.”

Chief Mountain (at right) on the border between the Blackfeet Indian Nationa and Glacier National Park. Photo © Sarah Lundstrum/NPCA.

On today’s Blackfeet Reservation, 1 million acres of land are under lease for oil and gas drilling, including the Tribe’s western boundary, which serves as the eastern doorstep to Glacier National Park. This is a place where grizzly bears still roam the prairies, where wetlands host beaver and moose, and where crystal-clear waters from Glacier’s alpine heights flow through the Blackfeet Reservation and on into Canada, before spilling back into the United States to join the Missouri River. Along this park borderland, developers anticipate drilling more than 80 wells using hydraulic fracturing technology, known as “fracking.”

What could industrial development adjacent to Glacier National Park mean? More dust, more traffic, more lights, more people, and more potential for a catastrophic spill or accident threatening one of the most intact ecosystems in the lower 48 states. It could mean a loss of dark skies to light pollution, the loss of native bull trout from the St. Mary River to water contamination, the loss of endangered grizzly bears to habitat fragmentation, the loss of community water supplies to industry’s unquenchable thirst, or even the simple loss of timeless, expansive views and profound silence.

These are prospects Pauline Matt and her fellow walkers refuse to accept. So for days, they walked and prayed and sang. Along the way, their footsteps sparked an important conversation on the Blackfeet Reservation about two very different futures for this ancient place: one in which oil and gas companies run roughshod over the land and its people, and another in which industry shows respect for the land, making special places off limits. Pauline envisions a future in which her people’s connection to the land provides an endless source of power, strength, hope, and prosperity—like the visionaries did who helped establish Glacier Park a century ago.

The walkers marched their 80 miles in six August days, but that week represents only the beginning of their journey. The ongoing debate over fracking is one that is playing out across the most cherished sites of our entire country. Their walk, ultimately, is about the future of our land, our water, our parks, and our people. We are fortunate to have brave women such as Pauline Matt to take these first steps on our behalf.