In 1882, New York City art collector Erwin Davis became enthralled with a landscape painting owned by a young artist named Julian Alden Weir, created by an unknown painter. Davis had already hired Weir to bring back some of the earliest French Impressionist works from his recent trip to Paris. Not satisfied, Davis also wanted this one particular painting. So he made Weir a special offer: a 153-acre Connecticut farm in exchange for the painting and $10. 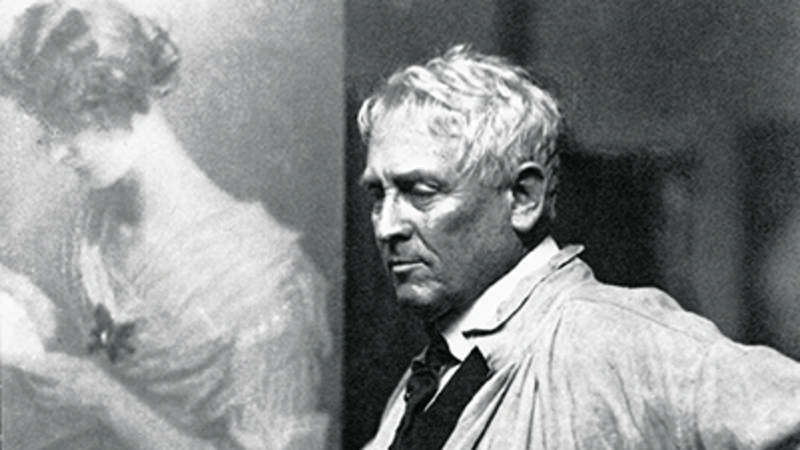 Julian Alden Weir in his studio, standing in front of “The Letter,” circa 1910.

Recently married, Weir already owned land in the Adirondacks, which he rented to affluent urbanites who tried their luck as “gentleman farmers.” But Davis’ estate and its proximity to Weir’s home of Manhattan were too enticing to pass up. In June of 1882, Weir stepped off a train in Branchville, Connecticut, to explore this farm perched atop Nod Hill. He would paint a small masterpiece, “Spring Landscape, Branchville,” that would be the start of a 40-year love affair with this sylvan space, one that would alter the course of American art history.

Today, this serene pastoral setting in southeastern Connecticut, an hour’s drive from Manhattan, is home to the only park unit devoted to American painting—the 60-acre Weir Farm National Historic Site. New York City residents who make the drive soon find city sprawl replaced by large estates and manicured gardens. When you arrive in Branchville, now a section of the Town of Ridgefield (the park’s acreage is in both Ridgefield and Wilton), continue up Nod Hill Road and you reach the New England of yesteryear. Century-old barns and a homestead still stand, stone walls are built around fields of swaying grass, and a large pond is lost in a canopy of tall maples and birches. They would become the fodder for Weir’s ambitious body of work.

“There are several artists like Weir who have been called the fathers of the American Impressionist movement, but Weir was certainly at the heart of it,” says Erica Hirshler, senior curator of American paintings at the Museum of Fine Arts, Boston. “Weir was an important figure in the translation of this radical French style into what became a celebrated American aesthetic,” and he achieved much acclaim in his lifetime.

Initially, Weir found the French Impressionist movement to be repugnant. When he first encountered the bold palette and loose brushstrokes of Monet, Manet, and Degas at a Paris exhibition, he wrote a letter to his parents noting that it was “worse than the Chambers of Horrors” and it left him with a headache.

Weir’s early paintings in Branchville reflect an appreciation for the scenery of rural life—dogs sleeping in the tall grass, his wife Anna sitting on the steps that lead to the house. By the latter half of the 1880s, Weir began to show an interest in painting landscapes, possibly due to the influence of his friends and fellow painters, Childe Hassam and John Twachtman, who often visited the farm to fish and paint the grounds. These weren’t the grand theatrical landscapes of his American predecessors, Thomas Cole and Frederick Church, but intimate portrayals of pasture, thickets of trees, barns, and meandering stone walls.

When his wife died during childbirth in 1892, Weir painted fewer and fewer figures and started to embrace the outdoors through en plein air painting, which would become the hallmark of Impressionism. “There are no rules in art except those which your own feelings suggest. He who renders nature to make one feel the sentiment of such, to me, is the greatest man,” Weir once wrote.

Weir produced more than 450 paintings, a few of which are on display in just about every major American art museum. According to Linda Cook, the park’s superintendent, Weir’s large body of work is a key reason for the park’s designation in 1990.

“The landscape retains its original integrity as a farm. All the barns, home, gardens, and studios are intact,” says Cook.

Walk inside the visitor center to see a short film on Weir and photographs of the artist standing with Childe Hassam and John Singer Sargent on the grounds. (Along with Hassam, Weir co-founded “The Ten,” a group of the leading American artists of the turn of the last century who would exhibit works together.) Then immerse yourself in the natural setting that inspired Weir and his friends. Trails lead to barns, a sunken garden, the pond across the street, and his studio and house, which will be open to the public for the first time this October, following restoration work. After Weir died in 1919, his daughter, Dorothy Weir Young, continued the artistic legacy at Weir Farm along with her husband, sculptor Mahonri Young, whose studio is also on display.

Not surprisingly, many of the visitors to Weir Farm today are artists. “Our mission is to continue to inspire the American public through the experience of art,” says Cook. “When you manage a park designed to inspire, you’re going to do everything you can to accommodate professional artists as well as the artist in everyone.”

Amateurs are welcome, too. Every Sunday from May through October, a professional artist offers instruction to visitors, free of charge, and Park Service staff provide free supplies. After all, the most memorable souvenirs are the ones you create yourself.

Boston-based writer Stephen Jermanok writes regularly on the arts and the outdoors for The Boston Globe, The Washington Post, and Men’s Journal.

This article appeared in the Fall 2013 issue