A proposed high-speed train from Baltimore to Washington would harm a national park, a national wildlife refuge, the Chesapeake Bay and numerous nearby communities — and charge expensive ticket prices to save commuters 14 minutes of travel time. 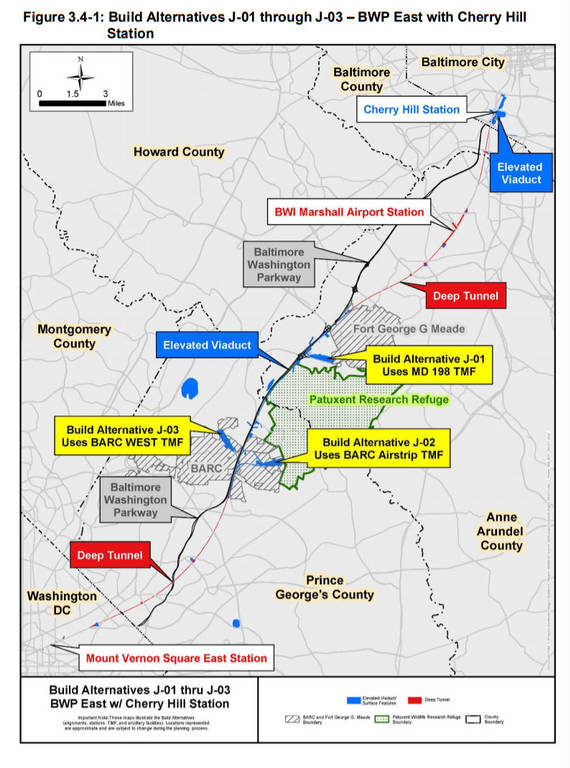 This map highlights three (of 12) potential routes for the Maglev project. These alternatives include a station at Cherry Hill in Baltimore, an alignment to the east of the Baltimore-Washington Parkway, and the three potential locations for the trainset maintenance facility. J-03 is the project sponsor’s preferred alternative, with a train maintenance facility located at BARC-West. (Click to enlarge.)

A superconducting magnetic levitation train, also known as SCMaglev or Maglev for short, can travel at speeds up to 300 mph or faster. Project developers for a proposed Maglev train in the Mid-Atlantic claim that commuters would be able to make the trip between Baltimore, Maryland, and Washington, D.C., in 15 minutes. The project would cost more than $12 billion to build, and the average cost of a one-way ticket would be $60, eight times more than the same trip on the local commuter rail line.

Approximately 75% of the project would run underground in deep tunnels, while the remaining 25% would run on aboveground viaducts. These viaducts would tower above communities, 150 feet off the ground. Construction would require the creation of a trainset maintenance facility, a 200-acre trainyard with hazardous chemicals and impervious surfaces. Maglev would also require the construction of 50-foot fresh air/emergency egress (FA/EE) structures every 3.5 miles along the route. Each FA/EE would require another three to seven acres of land. Construction would require right of way access roads, fences, power substations and more, negatively impacting a total of over 1,000 acres of land between DC and Baltimore forever.

$60
The expected average fare for a Maglev trip between Baltimore and Washington would be $60 per one-way trip, 8 times higher than MARC.

A threat to the environment and community

The Maglev project would permanently alter the scenic character of the Baltimore Washington Parkway, despite its protected status as a national park site. It could also require paving 187 acres of the Beltsville Agricultural Research Facility and destroy 24 acres of the Patuxent Research Reserve, a wildlife refuge owned by the U.S. Fish and Wildlife Service. The NASA Goddard Flight Center and U.S. Army’s Fort Meade also fall in the Maglev’s path. Up to 328 acres of federal property could be permanently harmed.

Project developers claim that Maglev would benefit clean air and climate change due to the number of cars it would remove from the road. However, the draft environmental impact statement shows that Maglev would actually increase regional transportation energy consumption by 39% — enough energy to power 88,900 homes. While Maglev is 25% more efficient than auto travel, it is 37% percent less efficient than existing bus service and 20% less efficient than existing passenger rail. In total, Maglev operation would increase net carbon dioxide emissions from 286 to 336 million kilograms per year compared to maintaining existing options, according to NASA scientist Dr. Owen Kelley.

The project would also overwhelmingly harm marginalized communities. People of color comprise 69.6% of the total population in the project study area, and low-income people make up 12.7% of the impacted population. Eighty percent of the parcels that would be harmed by land use conversion, rezoning and property acquisitions are in communities of color and low-income communities, and 100% of the aboveground viaducts would be in or adjacent to marginalized communities. These communities would see worsening air quality, increased noise and light pollution, and decreased property values from the Maglev project. And, with stops located only in DC, Baltimore, and the Baltimore-Washington International airport, these communities would bear all the harmful impacts of the Maglev without benefiting from being able to board the train in their neighborhood.

Lily pads on a lake at the Patuxent Research Refuge, the only federal wildlife refuge specifically designated for research.

Thankfully, there are existing alternatives to the Maglev project that are already operation — the Maryland Area Regional Commuter train (MARC), Amtrak and the D.C. subway system, known as Metro. Existing MARC and Amtrak technology could run from Baltimore to Washington in 29 minutes on an express schedule. This is only a 14-minute difference from the promised travel time from Maglev for a fraction of the ticket cost. MARC and Amtrak also already exist at well-established transit hubs such as Union Station in DC. Due to the nature of Maglev’s new stations, Maglev users would likely need to hire cabs or ride-shares to reach their final destinations. Recent announcements by the Biden administration and local governments in Virginia, DC and Maryland all show a commitment to investing in and expanding access to existing regional rail.

80%
of the parcels that would be impacted by land use conversion, rezoning, and property acquisitions are in underserved communities.

The continued development of Metro’s Purple Line will expand access to Metro’s services to new areas, opening up economic development opportunities and removing vehicles from the road.

If Maglev moves forward, it will poach an estimated 32% of annual MARC riders on the Penn and Camden lines (over 2.4 million riders) and 94% of annual Amtrak riders between Penn and Union Stations (over 332,000 riders).

NPCA calls on the Federal Railroad Administration to reject the proposed Maglev. Instead of investing billions of dollars in new, environmentally damaging technology, we should invest in our current transit systems to increase capacity and reliability. This will provide all of the benefits without harming the environment.