Protecting, interpreting and enhancing the history and environment at this urban oasis is critical. Unfortunately, development threats and underfunding have plagued this park site for decades.

Nestled along the Potomac River in Prince George’s County, Maryland, Oxon Cove Park and Oxon Hill Farm foster a diversity of wildlife and habitats. The 512-acre park is one of the last remaining undeveloped swaths of land along this stretch of the Potomac River, on the border of Washington, D.C. Oxon Cove interprets several histories of our region.

For thousands of years, the lands where the park stands today were occupied by native peoples. During the War of 1812, the family that occupied these lands could hear the Battle of Bladensburg underway upstream along the Anacostia River. From their hilltop perspective, they could see Washington burn after British soldiers lit the flames.

In the early 1900s, this land was used by St. Elizabeth’s Hospital as a therapeutic farm for the mentally ill. In 2005, the park officially became part of the National Underground Railroad Network to Freedom and is working to interpret the story of Jacob Shaw and the history of enslavement at the Berry Plantation.

Today the park is home to a children’s farm, welcoming students to learn about agriculture and interact with farm animals. Recreational enthusiasts and bike commuters travel throughout the park, experiencing wide open fields, wetlands and forest habitat. Fishermen cast lines along the cove, sometimes joined by a local pair of bald eagles.

But this small urban park could soon be transferred out of the National Park System.

In September 2017, Maryland Governor Larry Hogan and then-Interior Secretary Ryan Zinke signed a memorandum of understanding (PDF) signaling their intention to transfer Oxon Cove Park and Oxon Hill Farm to the state in exchange for over 2,000 acres in more rural parts of Western Maryland. 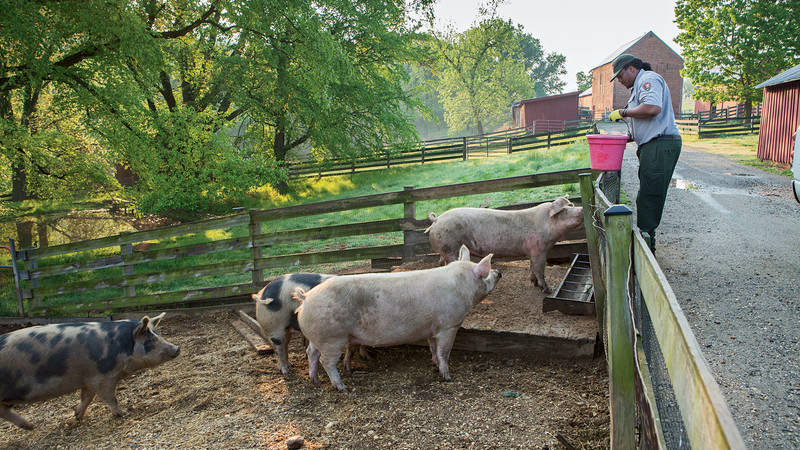 The National Park Next Door

Nearly six million people in the D.C. region live within a short drive of Oxon Cove. Why aren’t more of them visiting it?

This land swap — which did not become public knowledge until December 2018 — would remove Oxon Cove Park from the National Park System and set a dangerous precedent for future land swaps, stripping away our public land protections in favor of development.

Also troubling is why Governor Hogan would acquire the land — to further build up an already overdeveloped and heavily congested area.

Initially, he sought to build a new football stadium for the Washington team that already has a functioning stadium a short drive away.

The governor has since reversed his position on building the stadium at the site, but is still pursuing the land deal to develop what his office has referred to as a “Gateway to Maryland,” although specific plans on what this means for the future of the site remain unclear.

This proposed land swap jeopardizes access to public lands in favor of privatization and commercialization. The over $11 billion deferred maintenance backlog, coupled with understaffing of our national parks, leaves many parks vulnerable to attacks like the one we are seeing at Oxon Cove Park. With this land swap, the public would lose a historical place, educational programs and recreational opportunities, and the region would lose important green space.