Plans for a massive open-pit mine threaten wild salmon and bears at two of Alaska's wildest national parks.

Lake Clark and Katmai National Parks and Preserves in Alaska are a part of one of the wildest national park landscapes in the world. Lake Clark protects the headwaters of the Kvichak and Nushagak Rivers that flow into Bristol Bay, home to the world’s largest wild sockeye salmon run. Wild salmon sustain the traditional lifeways of local people, play an essential role in the ecosystem and support the $2 billion fishing industry that anchors the local economy. Additionally, the world-famous brown bears of the region allow for the most incredible bear-watching opportunities anywhere on the planet, which supports a thriving bear-viewing economy for the region.

But mining companies propose building a massive open-pit mine and accompanying infrastructure in the heart of the Bristol Bay region, dangerously close to these incredible national parks. The development, known as Pebble Mine, could decimate Bristol Bay salmon and threaten brown bears and other wildlife that call these parks home. It also puts Alaska Native communities and Alaska’s fishing and tourism industries at great risk.

#{image.caption}
The Pebble Mine proposal includes a road that cuts between Katmai and Lake Clark National Parks and Preserves. (Click to enlarge.)   U.S. Army Corps of Engineers.

Pebble Mine’s phase one plan includes a pit one mile wide and a quarter-mile deep, which would destroy over 4,000 acres of wetlands and more than 21 miles of salmon streams. Over 1 billion tons of tailings — toxic residue from ore — would be stored behind high-risk dams and left in the pit after potentially 20 years of operations. In 2012, the Environmental Protection Agency warned that “mining the Pebble deposit would cause irreversible damage to one of the world’s last intact salmon ecosystems.” 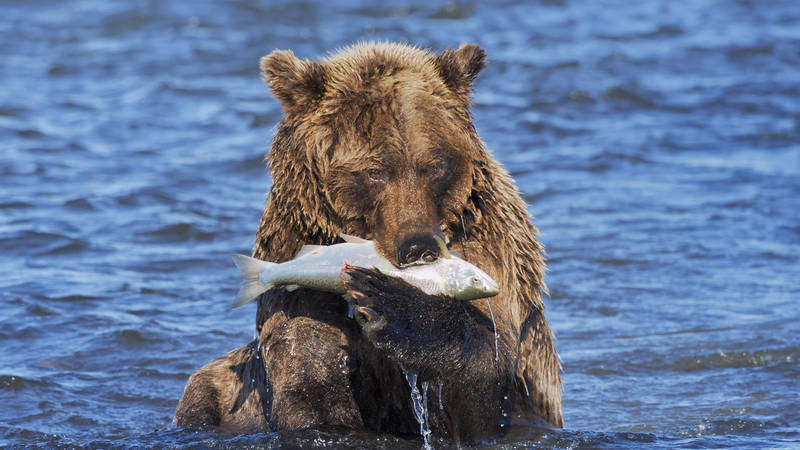 In addition, the newest proposal also includes plans for an industrial port and mining transportation corridor through Alaska’s Bear Coast, the coastline between Lake Clark and Katmai National Parks and Preserves. Bears move back and forth across this incredible landscape with no notion of park boundaries, and the industrial port and transportation corridor could destroy denning sites, increase negative bear-human interactions, and fragment essential bear habitat.

NPCA applauds the US Army Corps of Engineers decision in late 2020 to deny the permit application for the mining project. We also celebrate the recent decision by the Pedro Bay Corporation, an Alaska Native Corporation in the region, to approve conservation easements meant to make the transportation corridor less likely.

Even so, the fight to protect the Bristol Bay and Bear Coast is not over yet. With our regional partners, we are calling on the EPA to veto this project once and for all through their powers under the Clean Water Act. We also support permanent protections for the Bristol Bay fishery that would require congressional action to designate. Polls show that a majority of Alaskans oppose Pebble Mine and the threats it poses to the region. NPCA has stood with Alaskans for years, working to stop this dangerous proposal from becoming a reality. We remain adamantly opposed to the project and will continue to partner with allies and advocates to prevent the disastrous mine from harming this spectacular, intact and resilient region of the country.