Keep Massive Industrial Data Centers Away from our National Parks

Each year, almost a million people visit Manassas National Battlefield and Prince William Forest Park to walk the hallowed grounds of Civil War battlefields and seek the solace of nature a short distance from Washington DC. Proposals to build large data centers in Prince William County, Virginia, could compromise the environmental integrity of both national parks, even though 3,100 acres are already set aside for data center development in the county.

What Are Data Centers? 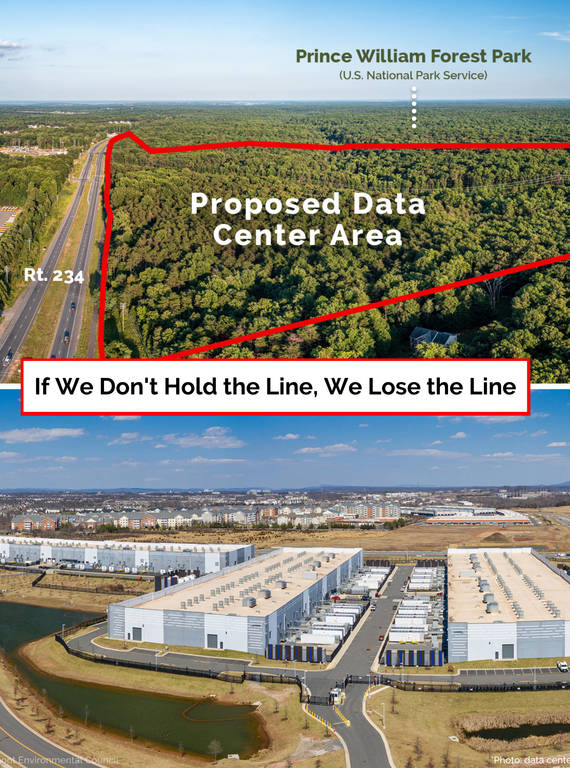 A visualization of the affected land at Prince William Forest Park and how it could change if the county allows data centers on adjacent land.

Courtesy of the Piedmont Environmental Council

Data centers are industrial complexes that house acres of computer systems for storing virtual information. Massive infrastructure must be built to support these complexes, including transmission, water and sewer lines. Data centers are slated to account for a fifth of the world’s electricity usage and more than 3% of carbon emissions by 2025. In 2020, data centers consumed an estimated 174 billion gallons of water — a 15-megawatt data center can use up to 360,000 gallons of water a day.

Approximately 3,100 available acres were already set aside by Prince William County in land known as the Data Center Opportunity Zone Overlay District. The district was intentionally formed to designate land where data centers would be minimally invasive to both residents and the surrounding environment. This smart planning protects our national parks and visitors from these massive structures. In short, data centers should be built where the necessary infrastructure already exists to support them: within the data center overlay district.

Fact Sheet Data Centers Data centers are environmentally problematic in a variety of ways. Specifically, data centers consume as much energy as 25,000 households per year and millions of gallons of water a day. They also disrupt communities with noise and health violations. Data centers can threaten national parks and drinking water quality.

How Are the Proposed Data Centers Threatening National Parks? 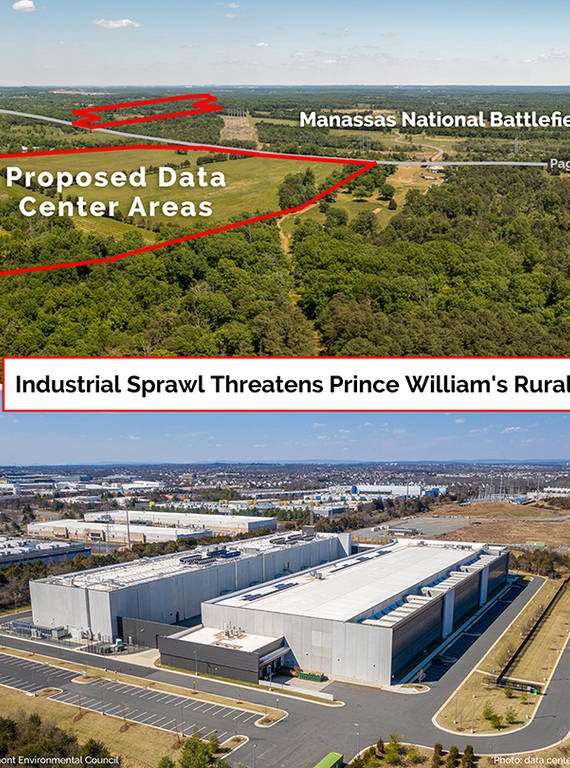 A visualization of the affected land at Manassas National Battlefield Park and how it could change if the county allows data centers on adjacent land.

Courtesy of the Piedmont Environmental Council

In March of 2021, the Prince William County Board of Supervisors started the process of adding about 160 acres within the congressionally authorized boundary of Prince William Forest to the data center overlay district. A congressionally authorized boundary encompasses all the land within a certain area that could one day become national parkland. This proposal is a direct threat to potential parkland.

Manassas National Battlefield is under similar threat. In May 2021, a dozen landowners approached the Prince William Board of Supervisors with a proposal to add their collective 800 acres to the data center overlay district on a road that directly borders the western edge of the park. This would mean that a sprawling swath of warehouses could be approved for development directly adjacent to the site of two historic Civil War battles. Of the proposed 800 acres, 107 are designated as “core battlefield areas,” where combat occurred during the Battles of Manassas.

Is That a Data Center in the Fields?

Both proposals are located within Prince William County’s Rural Crescent. In 1998, the county, with ample input from community members, determined that 75,000 acres - making up the western edge of Prince William County - would be strictly zoned agricultural land, both preventing urban sprawl and protecting groundwater and drinking water in the county. But the Rural Crescent does so much more than that. The Rural Crescent serves at the gateway to Prince William County’s national parks. It holds more than 40 miles of Virginia Scenic Byways and is home to numerous tourist attractions such as farms and breweries. On a national scale, such a large area has a direct impact on the ability of the state to meet the goals of the multi-state Chesapeake Bay Initiative and President Biden’s 30 by 30 initiative.

Unfortunately, on July 20th 2021, the Board of Supervisors voted in favor of initiating a study that could eventually allow 800 acres at Manassas National Battlefield to be considered for data center development. NPCA, along with the Piedmont Environmental Council, the Prince William Conservation Alliance, the Manassas Battlefield Trust, the Virginia Native Plant Society and the Coalition to Protect Historic Thoroughfare oppose the and urge the board to consider alternative areas for potential data centers, on available, appropriate land, away from our invaluable national parks.

NPCA recognizes the unavoidable necessity of data centers. However, we do not want to see these massive developments directly adjacent to our national parks. Prince William County has ample preapproved land to build data centers. There is no need to destroy historic viewsheds, raze wildlife habitat and degrade the integrity of Manassas National Battlefield and Prince William Forest when 3,100 acres within the county are appropriate and available for development.