This month is the first time the public can see the home of pioneering educator Carter G. Woodson during the event he founded — Black History Month.

Carter G. Woodson in the library of his Washington, D.C., home, which is now a national park site.

Decades ago, residents of Washington D.C.’s Shaw neighborhood would regularly see a man walking purposefully down 9th Street carrying books in his arms — so many books, they were sometimes piled high enough to obscure his face. Thus, the groundbreaking historian Carter G. Woodson, known nationally as the “Father of Black History,” also earned himself the local nickname of “Book Man.” 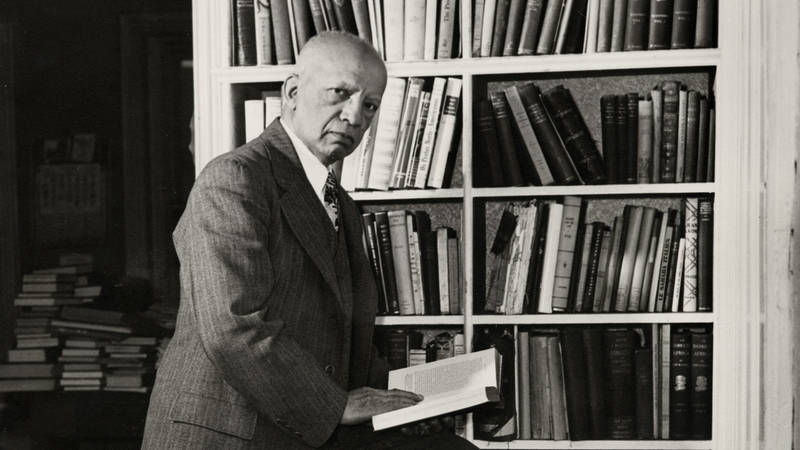 The National Park Service and its partners offer ways to honor the legacy of this scholar and pioneer who changed the way we understand American history.

It is a fitting tribute to a scholar who devoted his life to learning and education, who changed cultural awareness by documenting and distributing information on African American history and achievements, who wrote or coauthored more than 20 books — and who lived in a home filled with stacks and stacks of reading material.

Originally from Virginia, Woodson moved to Washington, D.C., to study at the Library of Congress while he was completing his doctoral degree at Harvard University. He purchased the 9th Street home in 1915 and lived there from 1922 until his death in 1950, keeping not just his extensive personal library on the premises, but also the offices of two grassroots organizations he founded and their numerous books and publications as well.

Congress designated the building as a national park site in 2006, as well as the buildings on either side of the main residence, but because the structures had sat vacant for many years and needed extensive stabilization and restoration work, the Carter G. Woodson Home National Historic Site did not officially open to the public until May 2017. That means 2018 will mark the first time ever that visitors will be able to tour the site during Black History Month, the event Woodson founded (originally as Negro History Week) in 1926.

The National Park Service will be commemorating Black History Month at the site with extended hours, living history demonstrations and walking tours of Woodson’s historic neighborhood.

The home currently has very little in the way of furnishings or personal effects, so visitors aren’t able to see the Book Man’s actual books — many of which were donated to universities and other learning institutions decades ago. They will, however, get an authentic feeling for how Woodson lived and worked. The interior and exterior of the building have been painstakingly renovated to resemble its appearance in Woodson’s time as closely as possible, including reconstructing the original façade brick by brick, rebuilding a circular staircase, and restoring original fireplaces and flooring. The 45-minute ranger-led tour allows visitors to learn about Woodson’s pursuits through each room of the building — which Woodson, who was deeply professionally driven, reportedly joked was not a home office, but an “office home.” Park rangers help bring the empty house alive, offering insight into Woodson’s strict character, his considerable professional accomplishments, and his connections to contemporaries he both taught and learned from, such as Mary McLeod Bethune, Nannie Helen Burroughs and Langston Hughes.

The free site tours are normally offered every hour from 9 a.m. to 4 p.m. on Thursdays and Saturdays. During the month of February, the site will also be open on Fridays and Sundays. Learn more about the upcoming events on the National Park Service website or by calling 202.426.5961.